What Do Polar Bears Eat? Sadly, it’s Not Pancakes 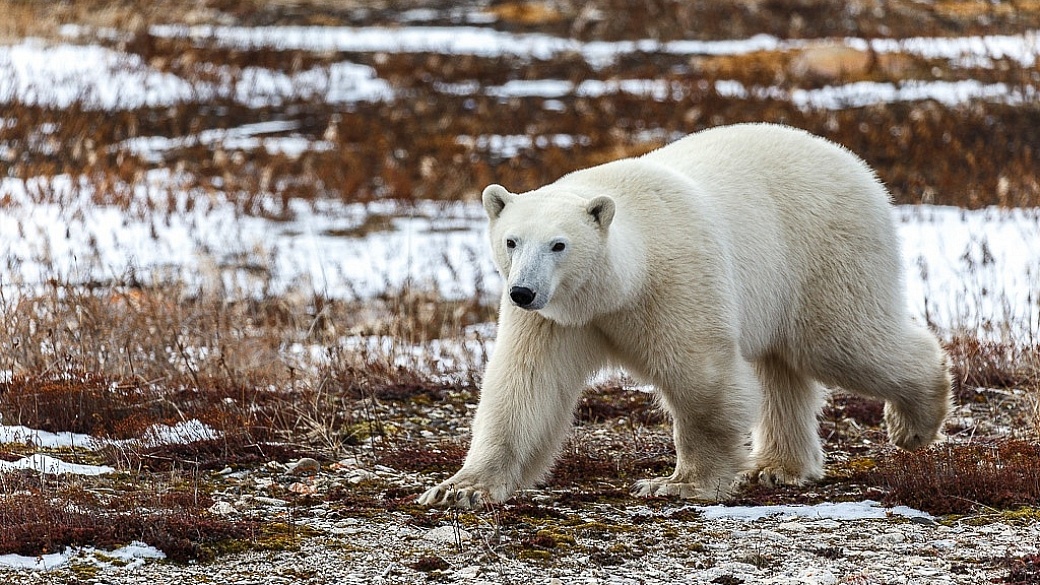 What Do Polar Bears Eat? Sadly, it’s Not Pancakes

Polar bears are heart-meltingly adorable, right? They have an incredibly positive public perception. From what I can tell, they enjoy ice skating, drinking carbonated beverages and they love to wear colorful scarves because their necks get cold.

But when I express my deep desire to hug a polar bear I get nothing but negativity. “That will be the last hug you ever get.” “Sure, and then they will eat you.” and “Don’t do it, they’ll rip your face off.”

Why does everyone try to stop me from snuggling with them?

Because, it turns out, even though they are beautiful – truthfully magnificent in fact – they are carnivorous predators. What do polar bears eat? While they prefer ringed seals, they have zero qualms about eating other mammals, especially when deprived the opportunity to hunt for the next species down on the food chain.

To see a polar bear in its natural habitat is something beyond special. It’s mesmerizing, meditative. Honestly, during my time up in Churchill, Manitoba, I almost couldn’t believe I was watching them wander the tundra in front of me. 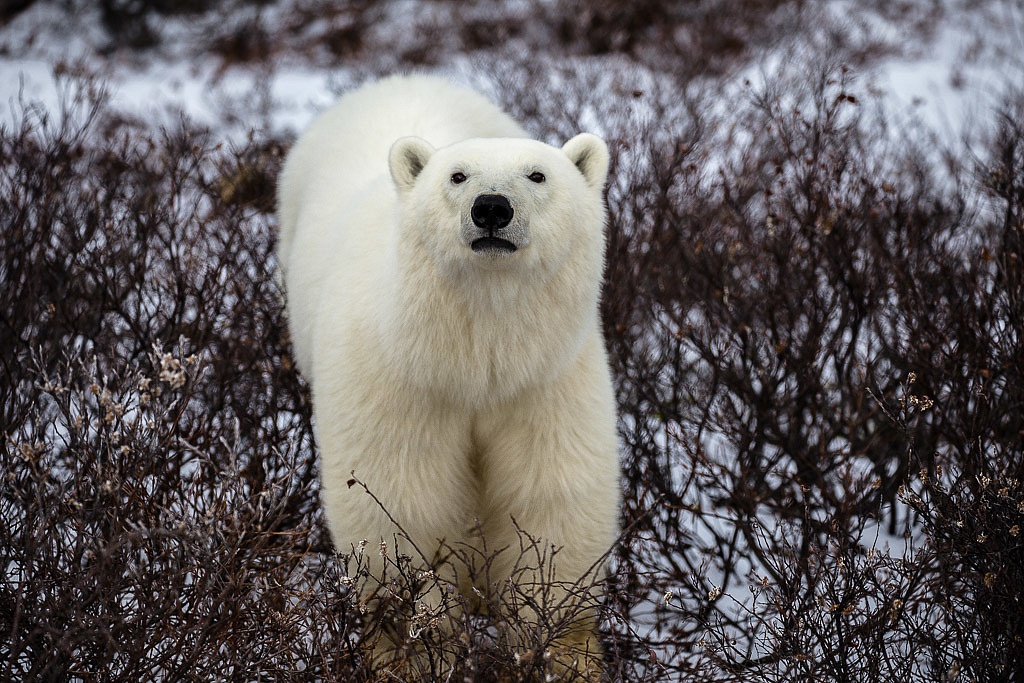 The largest roving land carnivores, these bears are goofy and graceful, and I have to say, I had the hardest time assigning abominable motives to their beguiling curiosity. These 800+ pound snowballs would saunter right up to my observation buggy and look me deeply, silently in the eye and it’s all I could do to not jump into their arms and whisper, “hold me.”

Like resisting that bad boy because you know it won’t end well or maybe you’ll get your head sliced open, I respectfully kept my distance, instead making googly eyes at them and saying things like “who’s a pretty bear?”

After spending four days observing polar bears in Manitoba on their freezing turf, here’s what I’ve learned about these gorgeous animals.

1. They let it all hang out 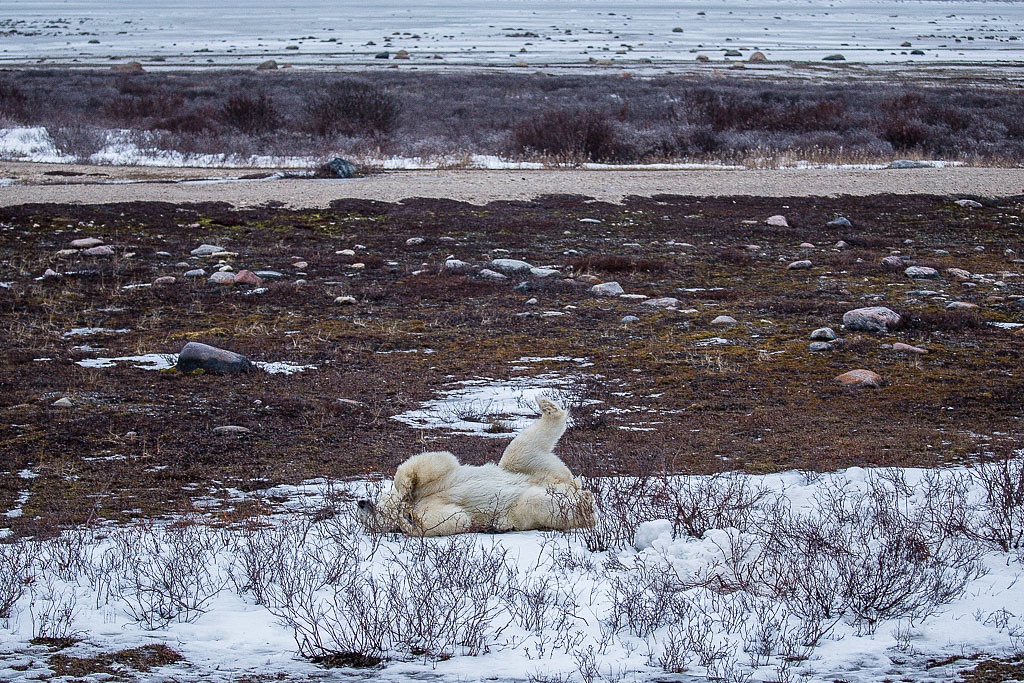 I saw more rolling around and stomach scratching than a bunch guys watching a sporting event while eating foot long subs.

2. They are always on alert 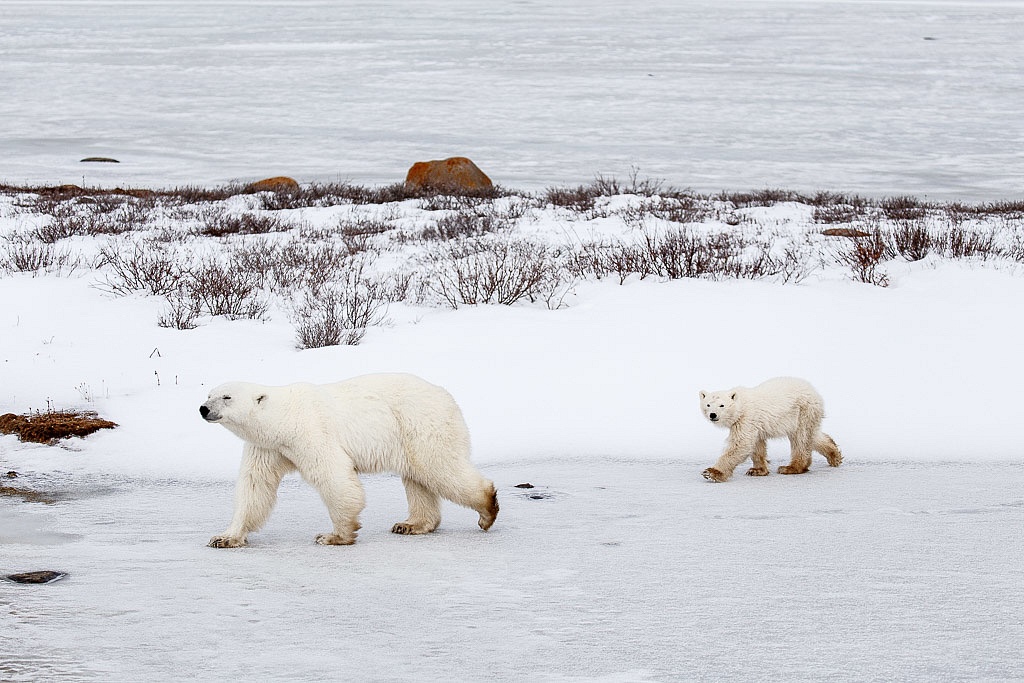 Smelling the air, constantly on the move, these bears are in survival mode quite often. Once another bear’s scent wafts by, mamas, babies and weaker bears continue on the move. 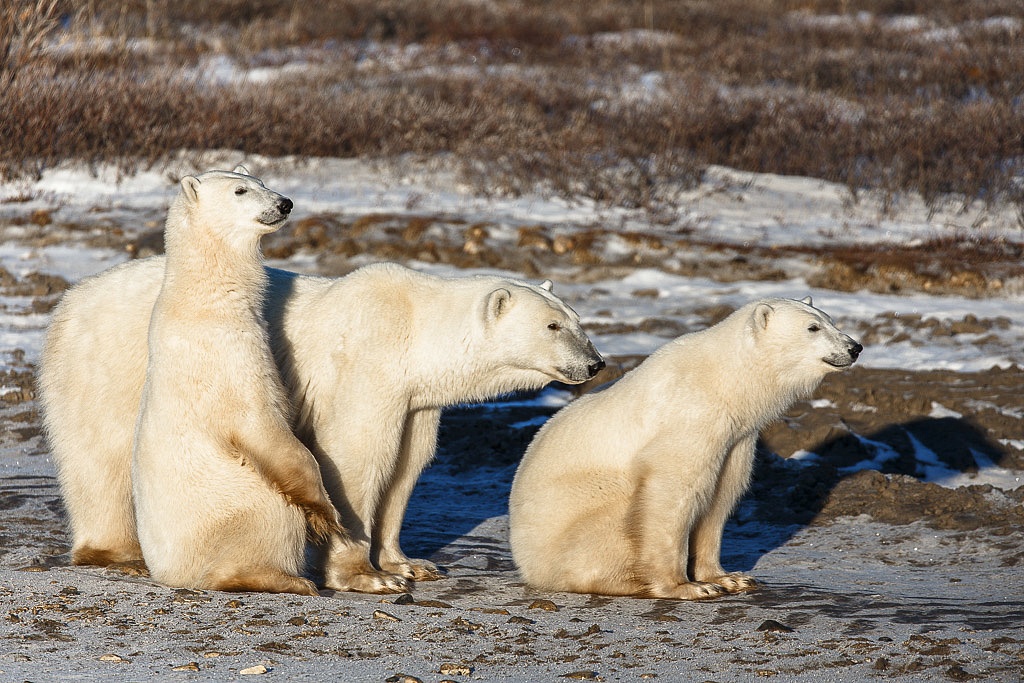 Curling up with their babies, mama bears stay with their cubs, teaching them about life, the wilderness and how to survive for first two and half years of their lives. Mamas will nurse their young for at least 18 months. Awwwwwww. 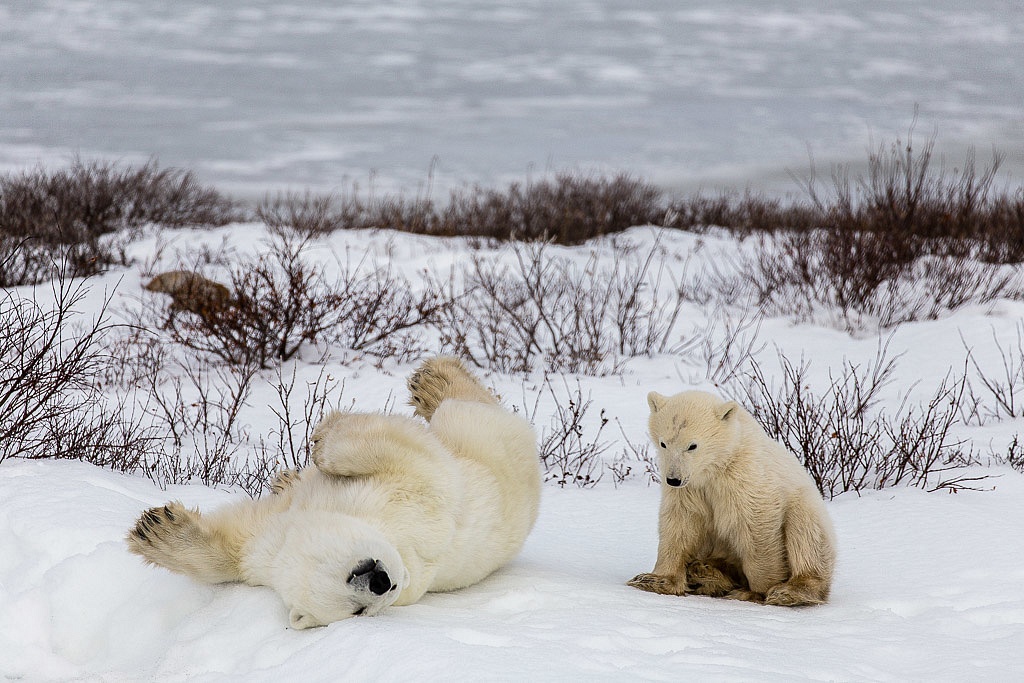 Rolling in it, sliding on it and playing with it, these bears are one with snow. 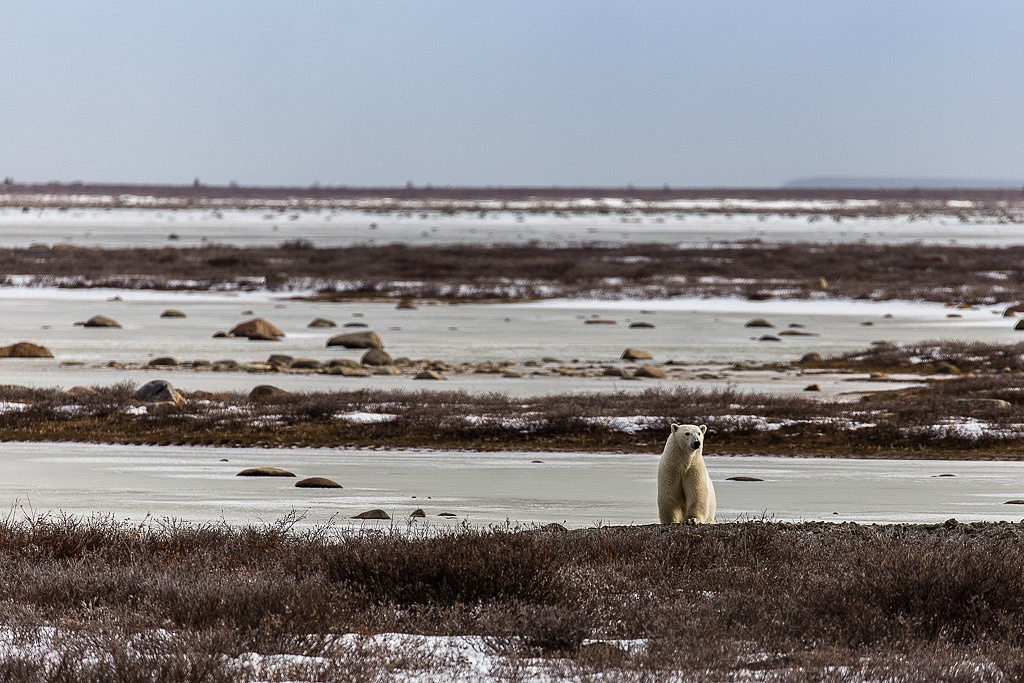 Not a pack animal, polar bears (with the exception of mamas and their babies) prefer solitude to joining up with the others. Sometimes you will watch two males spar, but often they are testing each other or gearing up for mating season. I watched many duke it out and then wander off to fall asleep alone. 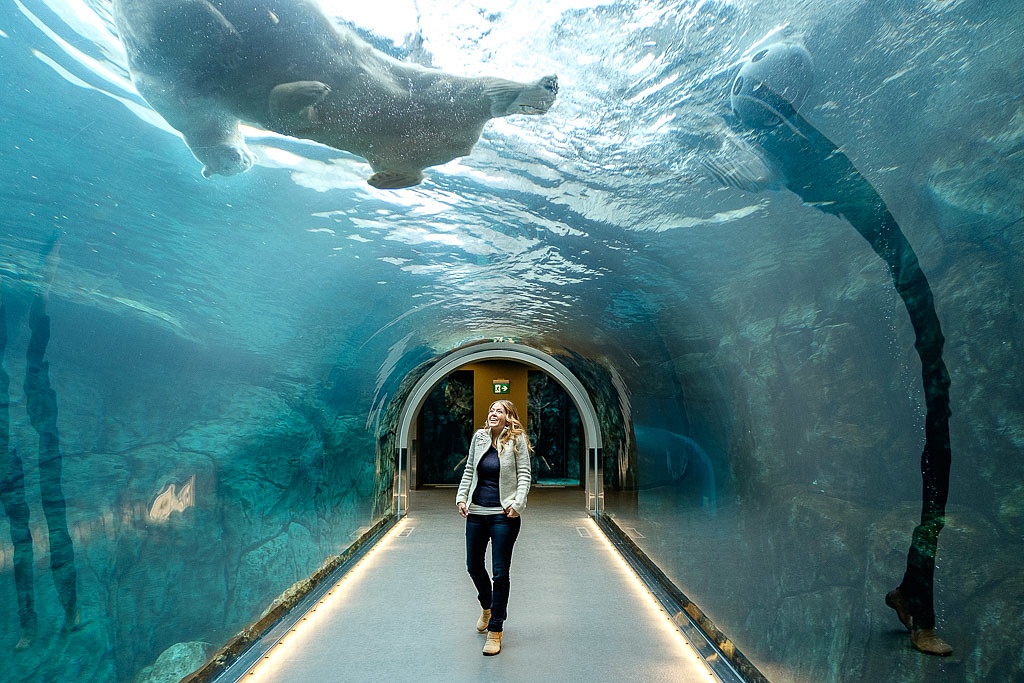 Watching them play is to be captivated by them at their zenith of adorability. This, by the way, is at the Assiniboine Zoo in Winnipeg. These two adolescent bears were batting a ball around and playing a fierce game of Marco Polo for hours. 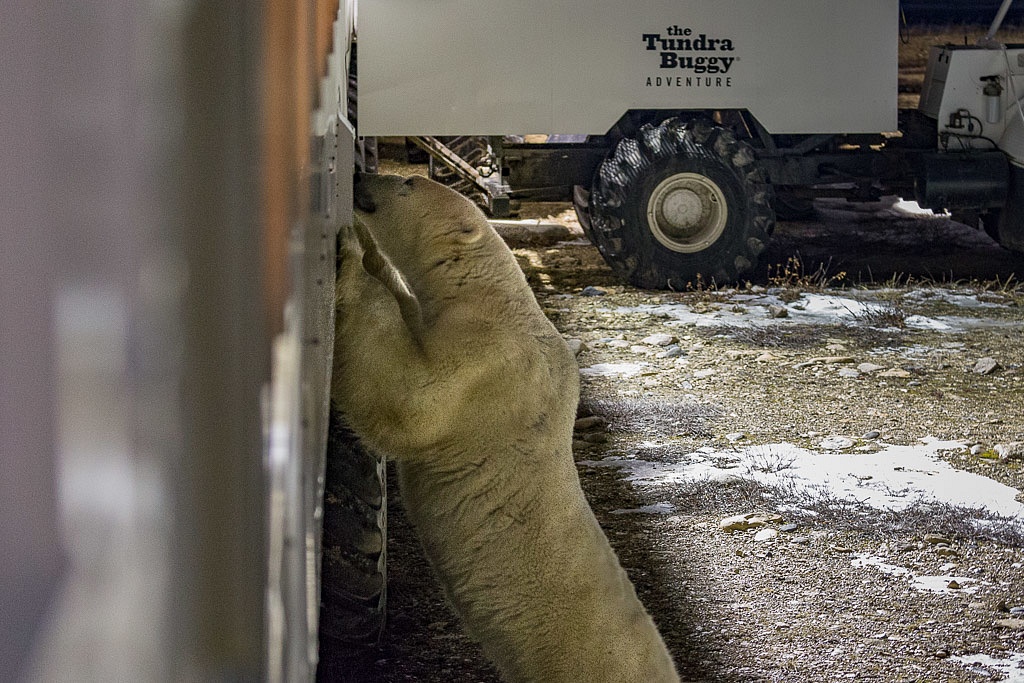 They come right up to the buggy and, if you’re super lucky, they stand up on two legs and give you some “Buggy Love,” a term coined by the folks at Frontiers North Adventures.

8. They can sleep ANYWHERE 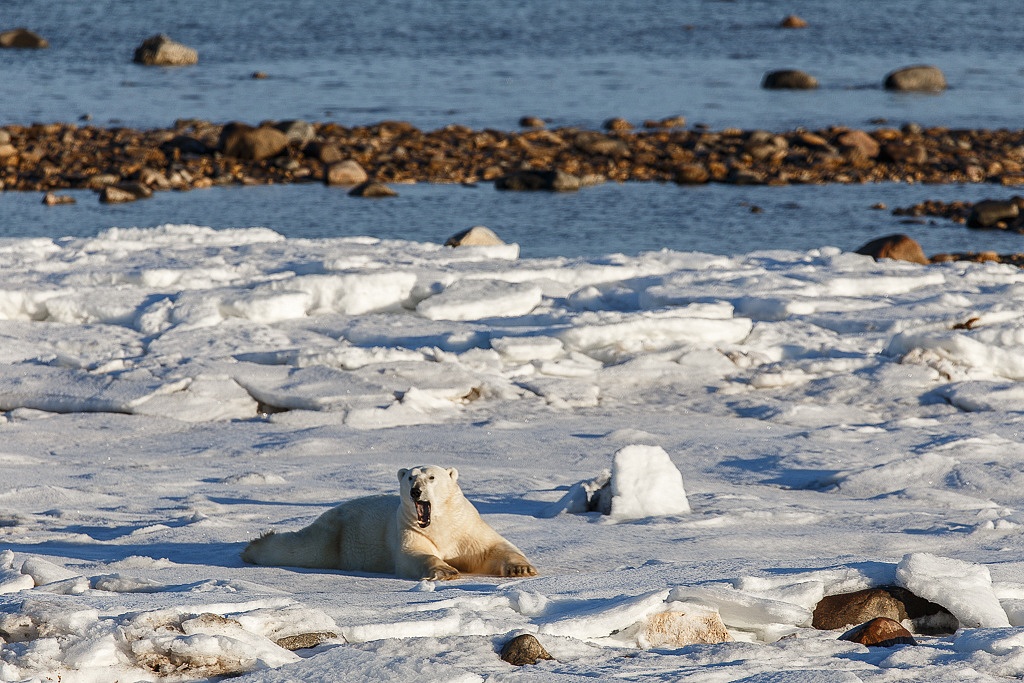 Snow? Wind? A bed of ice? No problem when you’re a polar bear. They even seem to enjoy it. 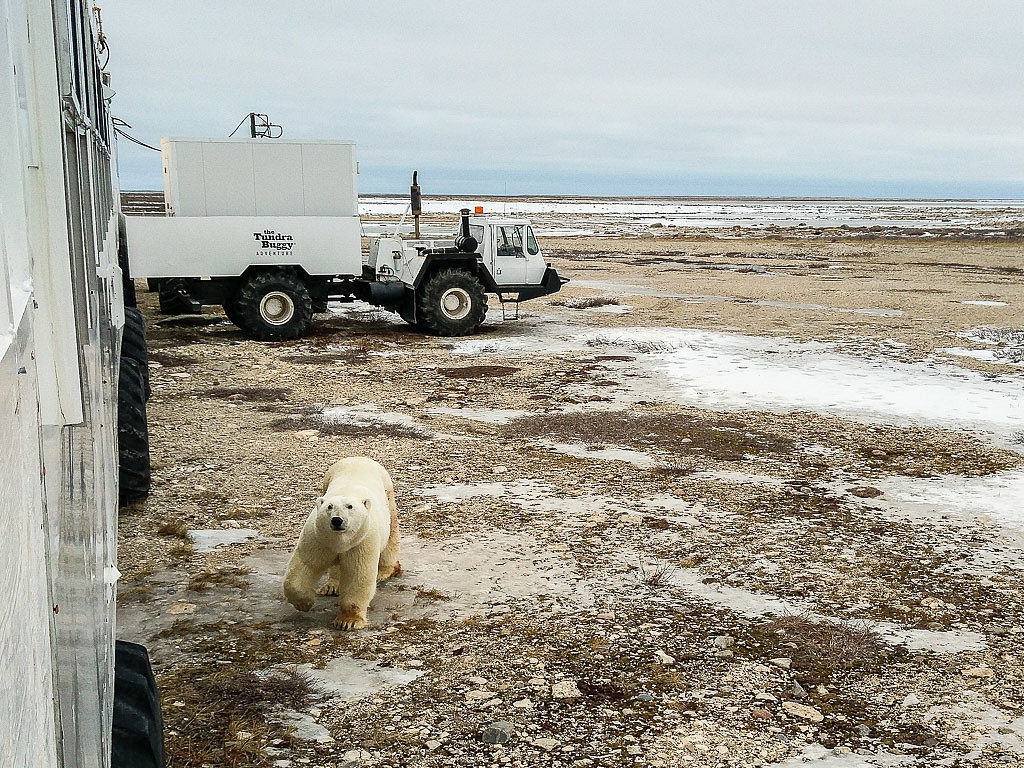 At least that’s what I gathered from this guy who wandered over to the dining car once the buttery smell started floating across the tundra. The pancakes aboard the tundra buggy WERE amazing, by the way. Thanks, Chef Jared!

10. And, well, turns out they’re not vegetarians (though could we get them to exist on blueberry pancakes?!? Chef Jared??).

They eat adorable, smiling, happy little ringed seals to survive. (Sorry, I have no idea if they are happy. But if I looked like that I’d smile all day too…until a polar bear spotted me. Sigh.)

I’m so conflicted about this. I know this is natural and necessary, and yet, here I am realizing that in order for me to root for the polar bear, I have to be okay with the puppies of the marine world being eaten. I don’t know how to reconcile my desire for both animals to live. I don’t watch nature shows for the same reason. I’m a wuss.

Why can’t all animals get along like this dachshund and lion?

The planet only succeeds because of the functionality of this circle of life. As a human, the only thing we can do is stay out of it, which includes not irrevocably altering the ecosystem to the point that the bears can no longer hunt for food.

Another thing I observed during my arctic trip?

11. Polar bears are waiting longer and longer to eat. 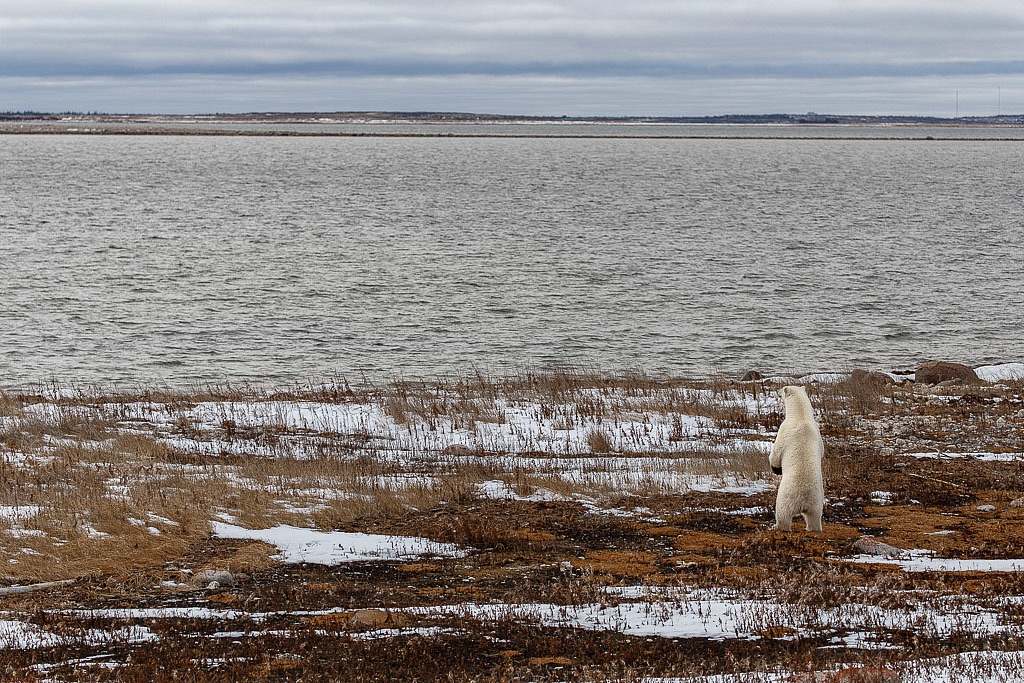 It’s mid-November and this ice should have been frozen by now. I watched this guy pace on the shore of the lake, which in years past was frozen by this time. Every year the ice melts a little sooner, forcing the bears back onto land. And each year, they are waiting further into the season for the ice to return. As greenhouse gases continue to heat up our planet and thus their habitat, polar bears face the very real possibility of extinction, as early as 2100 if we don’t start making changes.

Polar Bears International, a group of scientists and conservationists dedicated solely to the preservation of these creatures, have a fun and helpful site on how each of us, no matter our role in the community, can do our small part to help the bears survive. It’s not too late to help. Wondering what you can do? Start here.

My polar bear safari in Churchill, Manitoba will sit with me for a very long time. While it continues to live in my memory, hopefully it never becomes just a memory of the time we had polar bears walking the earth.

Want to understand the science of climate change? Read more about how loss of sea ice is threatening the bear’s existence here or this FAQ from actual scientists here.

My trip to Northern Canada was made possible by Travel Manitoba and Frontiers North Adventures. Churchill, Manitoba is home to a polar bear population of around 900 and is one of the most accessible areas in the world to see these spellbinding creatures in person.

Until last year I didn’t even know staying up on the tundra amongst the polar bears was a thing. IT IS TOTALLY A THING. This trip is one for the bucket, so start figuring out how to get up there now. You can read more on what to expect and how to do it here.

Frontiers North has truly fantastic tours and runs a lodge in the remote tundra smack in the middle of Polar Bear Point. I 100% recommend them. Read more about their polar bear tours here. 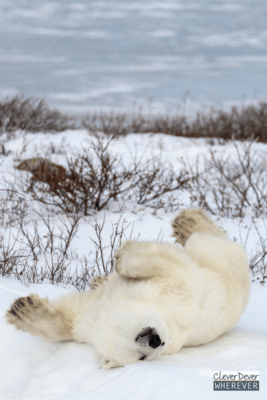 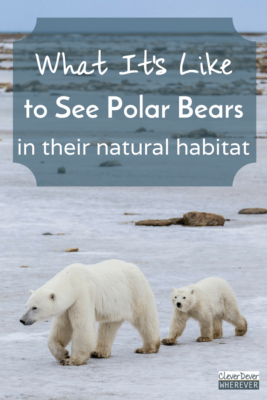 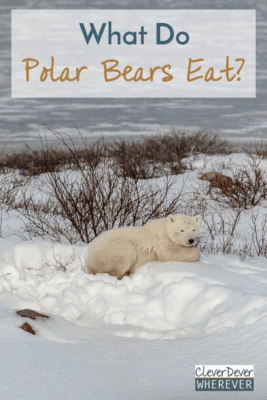 What You Need to Know About Seeing Polar Bears in Churchill

“I love this flight!” Doug, our guide, pats his pocket. “I don’t have to check my Swiss Army knife AND we get to drive right up to the plane.” Even though I’m not sure what defense a Swiss Army knife will be against a polar bear, the fact that we can carry it on does feel like we’re getting away with...

"I wish it was winter already" Molly, who works at the Iceberg Inn says, throwing off her coat to reveal a tank top. "It's like spring out there." Bundled in various layers of wool long-sleeved shirts and sweaters, I look at her. My beanie creeps over my eyebrows again. I can’t get warm.

Somewhat like what I image an Inuit fever dream to resemble, a blur of thick whitish fur swam past me and then up and over my head. For a moment, two huge, round polar bear paws stood directly above me, adorable black pads flattened against the clear barrier separating us.

“You like the cold.” This was an actual statement made to me on my recent trip up to Churchill, Canada. I was instantly incredulous. Only insane people like being cold. But I allowed the statement to sink in. This was my second trip to the sub-arctic in as many years. Gasp! Who am I?? 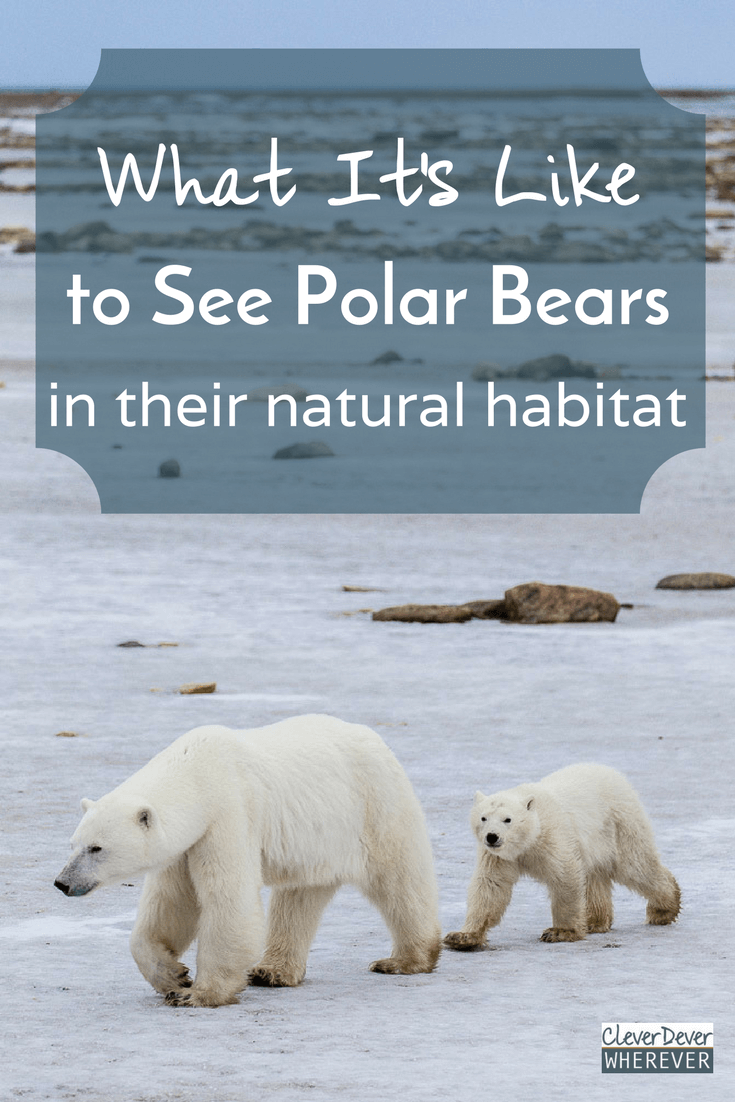 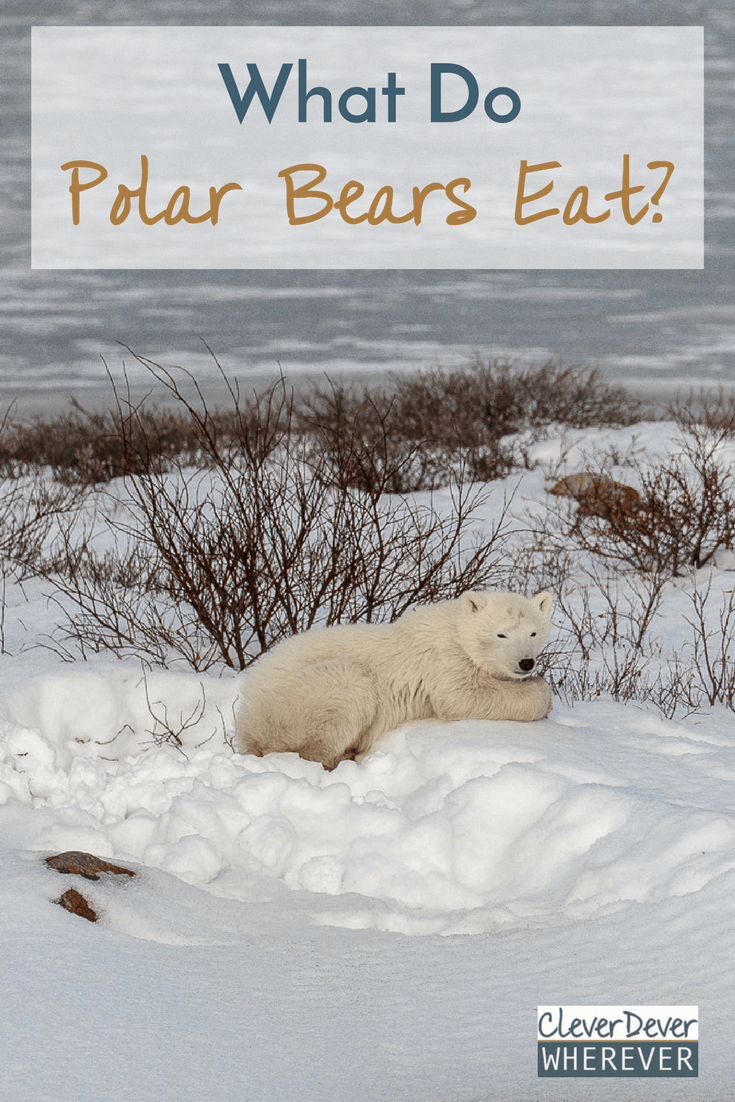 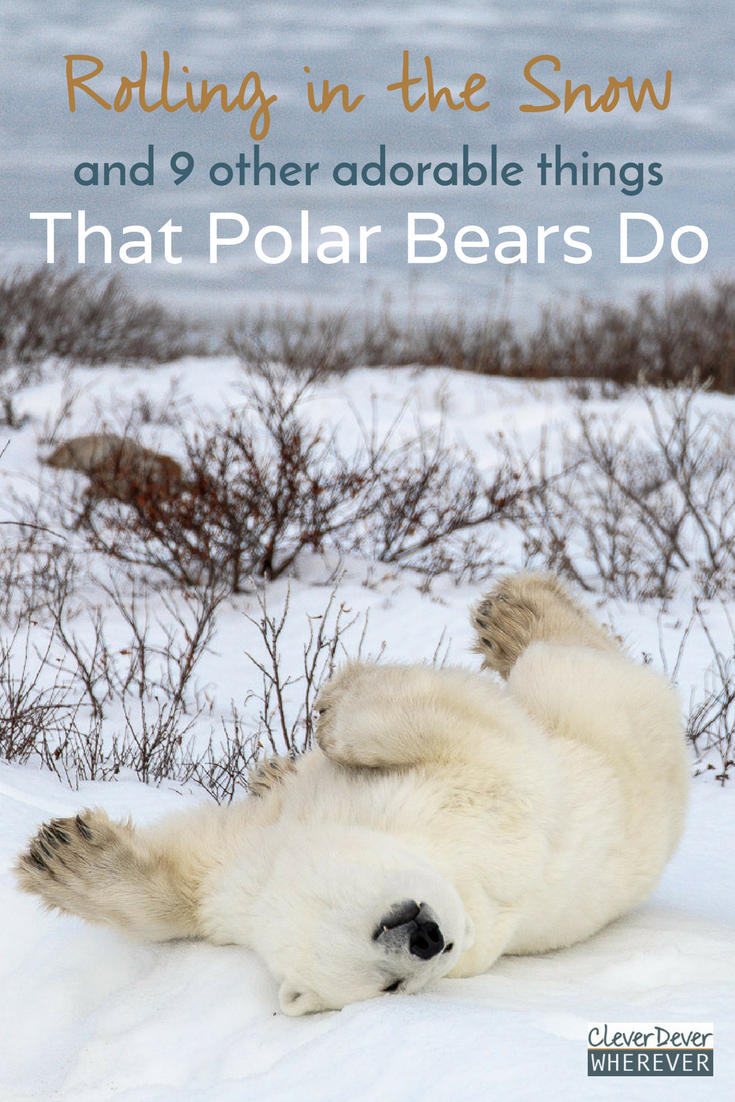 Tweet34
Pin487
Share28
549 Shares
Tags: Canada•Churchill•Manitoba•North America
OlderWhat You Need to Know About Seeing Polar Bears in Churchill
NewerAustin, I Love You So Much: a Weekend Itinerary