Hi. I’m Juliana Dever and according to science I have some sort of “exploration” gene. Embracing this compulsion, I spend a lot of time hurtling around the planet in metal tubes experiencing other cultures and writing humorous essays about it. Enjoy.

I find myself toasting to life, love, peace, and I’m pretty sure pizza more often than I can count.

And it’s always in the homes or restaurants of locals I’ve recently met somewhere around the world. The food is almost always outrageously good and the company is fascinating and fun.

Like the time I was invited to celebrate Christmas Eve with an Icelandic family in Reykjavik.

Or when I learned a traditional dance at an island-wide potluck at the top of a volcano in Greece.

There’s also that dinner at a family’s home restaurant in Tbilisi, Georgia. My table somehow got absorbed into a folk song flurry, plucked out on instruments they happened to bring in the event of an emergency party.

…and the campfire with Bedouins in the Arabian desert,

the truffle making with a chocolatier in Belgium,

drinking camel’s milk in a yurt with a camel-herding granny in Mongolia,

ringing in the new year with 3 million Brazilians on Copacabana beach,

And shutting down an oceanside pub in Ireland with a spirited debate over who makes the best whiskey. I don’t remember who won that debate…

Some days it’s still pretty crazy to me that I ever left the United States.

I grew up in a small town outside of St. Louis, Missouri. No one I knew had a passport or had ventured much further than one state over – two if they were fancy.

My family encouraged me to stay small. Oh, and to stay out of the way and please, for the love of God, don’t talk to strangers. But I’m bad at following directions. And I have a curiosity streak a mile (or 1.6 kilometers if you’re metric) wide.

As a child, that other midwestern explorer Dorothy Gale of Kansas was my hero.

We were so alike: She loves dogs (I have three rescues), travels to colorful lands (my dream!), and she hates flying. She also attracts the kindest, smartest, and most adventurous travel partners (you should come on my tours – my guests are the BEST).

Which began the struggle of trying to stay on my parents’ ‘get a reliable and uneventful job’ path. I tried newspaper printing, pasting up medical textbooks at home, and embalming at a local mortuary. Not a lotta laughs. And probably terrifying if there were.

I wanted to see the world so bad I began to view tornadoes as a viable means of transport.

Then I landed at Trans World Airlines. I’d never even been on an airplane before. Something magical happened. Remember the moment when Dorothy opened her front door into Oz and everything was in Technicolor? The world seemed like something I could actually explore.

I want everyone to feel like this. To travel to places unknown to you. To see a world filled with beauty, wonder, and adventure. To meet and learn about other cultures on a deeper level. To hear joyous greetings at your arrival and maybe get giant lollipops.

When I got my wings I started seeing all the things – amazing things! Like Madrid and black sand beaches and Chicago. I was unstoppable.

That’s what happens with travel, it expands your mind, and connects you to the whole of humanity.

You’re tougher than you know, softer than you realize, and have a capacity to eat far more than you ever dreamed.

You make new friends, find out who you are, and plumb the depths of your creativity.

After my first international trip, I came home with more courage than baggage. And my dreams had doubled in size.

Which somehow gave me the determination to move to Los Angeles and train to be an actor. Making a series of bold steps (with my family firmly against all of them), I managed to become a recurring character on a popular ABC show (Castle, if you’re interested), and star in independent films (Ooooh – do you watch Lifetime?).

In the last 25 years, I’ve traveled all over the world – to more than 60 countries. I’ve lived in Greece, Russia, France and I just bought a place in Portugal.

After my first trip to Georgia (the country, not the state. I’ve somehow never been to the state), I knew I needed to bring my readers along in a more tangible way. That’s how my Cultural Immersion Trips were born.

Not everyone wants to drop themselves in the middle of the unknown. And your time is precious – why not have someone who’s been somewhere, like, a lot, plan this for you?

I spend half of every year researching, visiting, and working with women and local families in eastern Europe. Together we create some of the most authentic, fun, and delicious tours that you will ever go on.

Tours where you’re guaranteed to meet locals, because you’ll go to their homes and eat. Tours that will fill you with joy, challenge your perceptions, and bring you new friends. You might also return home feeling bolder, more creative, and more connected to this planet we all share.

Let’s go have an adventure together. No flying monkeys, just emerald cities from here on out. Click here to find out where you can go this year. 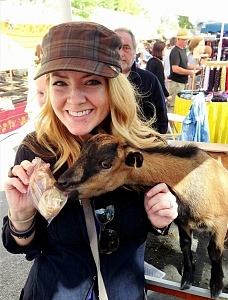 Me and one of my loveable scamps in Provence, France.

Read my reviews on TripAdvisor