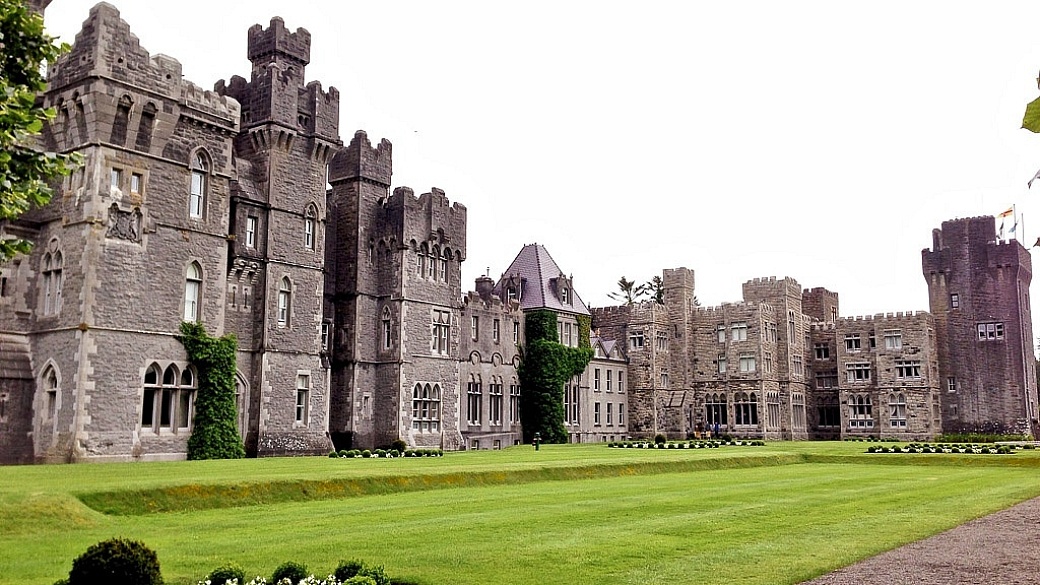 Nine years ago, when I first visited Ireland we stopped in a bucolic little town called Cong, made famous by the 1950s John Wayne movie The Quiet Man. Because it was my father’s favorite, he watched it a lot. And when I was a kid we didn’t have iPads so I did too. I was instantly taken with this place and I vowed that one day I would return and stay here. And almost a decade later, I finally get to fulfill this dream. 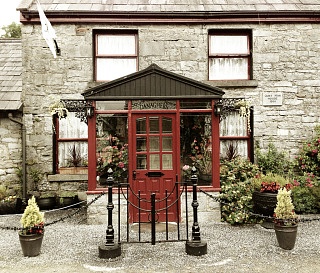 One of Cong’s adorable houses, used in the filming of The Quiet Man.

Cong was the filming location for much of the movie, and when the Hollywood crew descended upon this little town they lit it up. Literally. Electricity came to the village in 1951, just the week prior to the production. Locals love talking about it and you pretty much can get any conversation started here simply by asking about the movie.

The town of Cong is immediately enchanting, but what really captured my imagination was the gorgeous medieval castle turned luxury hotel called Ashford Castle that sat just to the side of town. Originally built in 1228, the imposing grey stone fortress barely gives a hint of how gorgeous and luxurious it is on the inside. Looking at it from the outside, I expected I would be padding around on murky floors of exposed rock while carrying a candle to light my way. Or maybe I sort of hoped to. I have an active imagination. Whatever. Truth is, the hotel has recently undergone a remodel that puts you in the lap of luxury, heated bathroom floors, remote control window shades and all. 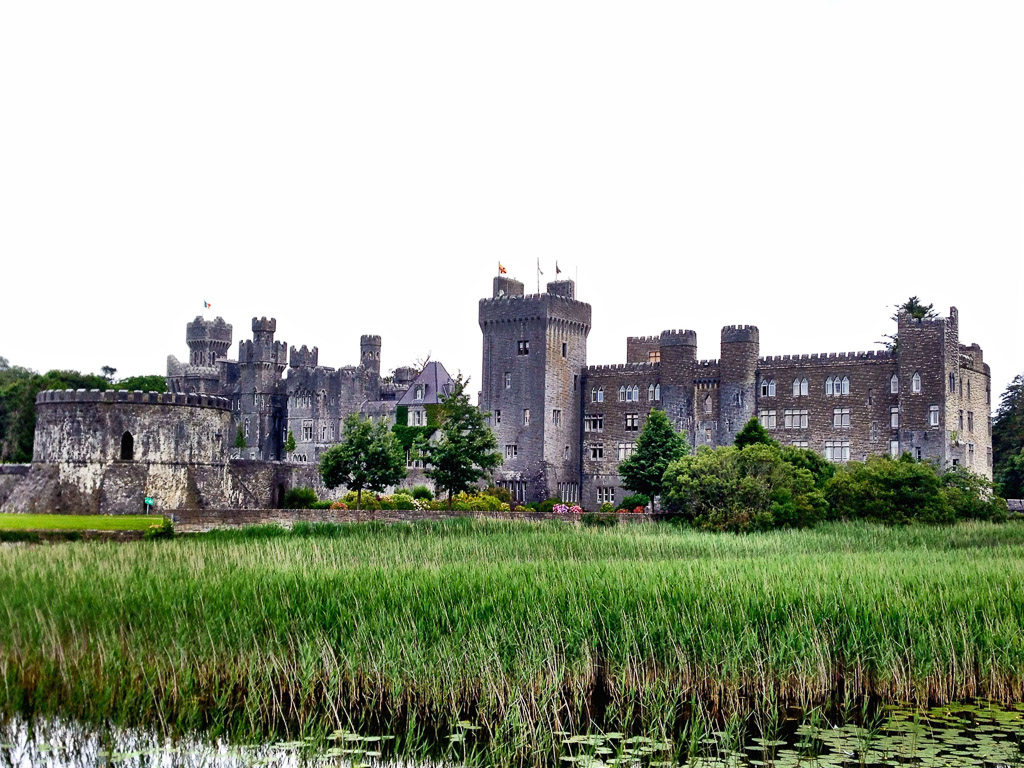 Much to my dismay, no dragons appeared during my stay at Ashford Castle.

The 26,000 acres of surrounding grounds are breathtaking and beckon you to stay. There is a dense, old growth forest that is so beautiful and serene, so…medieval that you would swear that Robin Hood and Little John were running through this forest. It also has a river that flows peacefully through it and out into Lough Corrib behind the castle with a tiny stone fishing hut over the estuary and pathways into the thicket that beg you to follow. Do it, there’re several caves to encounter and it’s all ethereal. 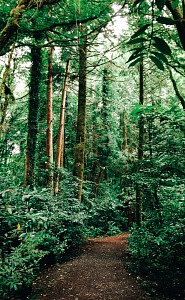 You can hike for hours in this woods, but alas, no Robin Hood. 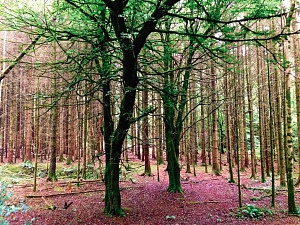 See? Ethereal. This place stays with you.

If you are looking for a splurge in Ireland, something truly different and magical, then this is your place. Though I’ve stayed in some amazing hotels, this one transports you to a different time period and you feel like royalty or at the very least a member of the Downton Abbey family (or house staff, depending on your self-esteem levels). 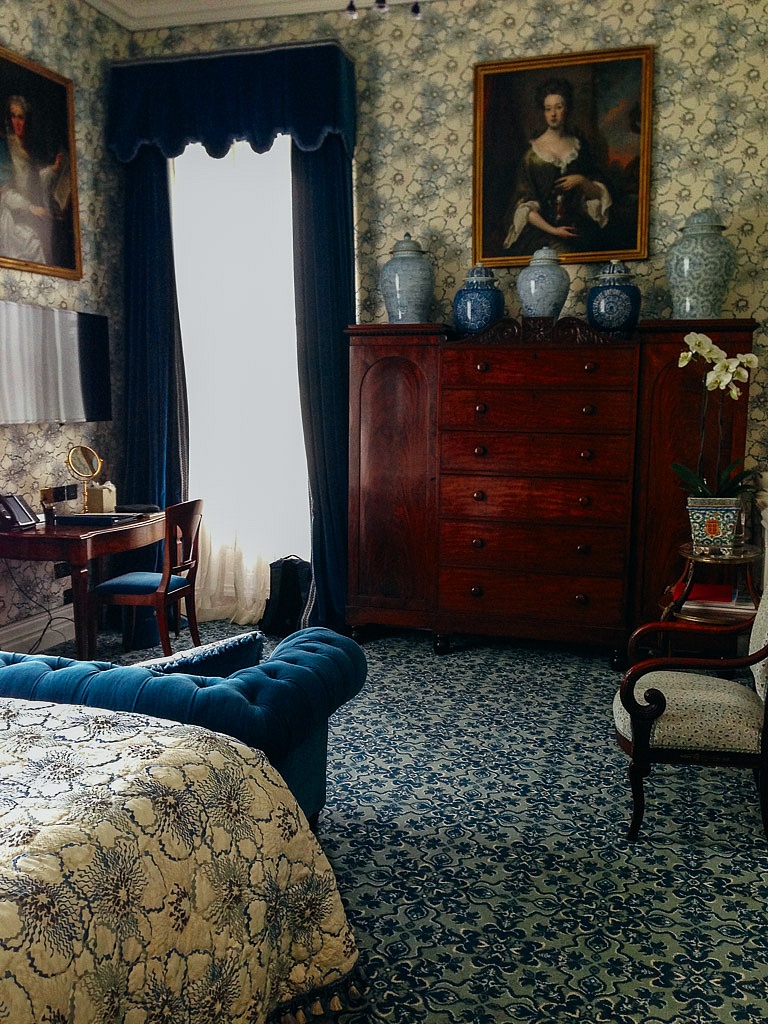 Our room, a Victorian Deluxe, newly remodeled. Can’t believe they trusted us with ceramics. 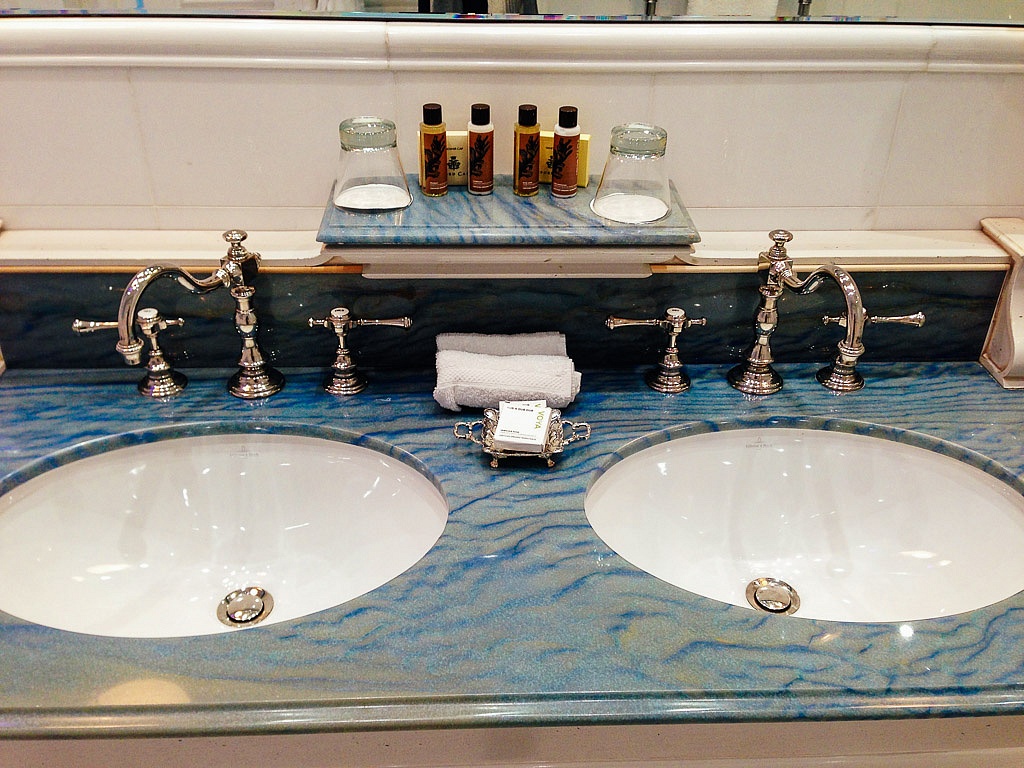 Double sink in the bathroom, every couple’s dream.

This property has so much to do that you needn’t leave for days. And when the weather gets moody, you may not want to. There are three restaurants inside the castle and a lodge across the way and they all serve wonderful, if pricey meals. We opted for an evening in the dungeon, feeling like miscreants while eating, and grateful no peasants were harmed in the making of our delicious meal. 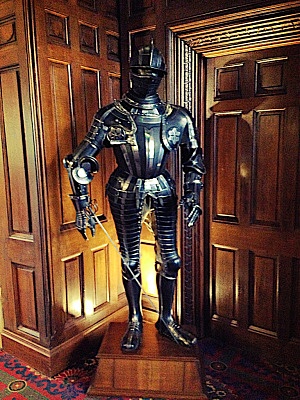 Upon arrival you will meet Sir Greetsalot in the lobby of the hotel.

In the evening there are several areas to sink into and enjoy the night. We started in the cozy drawing room where we had the excellent fortune of being entertained by two delightful Irish women. They sang perennials, played piano and kept us all updated on Mary-Margaret’s mother’s hip surgery down in Kilarney. The adjoining bar is another sumptuous place to tuck in for a nightcap-soaked conversation amongst the tapestries and suits of armor.

The other fabulous thing about Ashford Castle is the amount of activities available to enjoy right there on the grounds. As long as the weather is decent you can have your choice of archery, falconry, horseback riding, skeet shooting, boating on the loch, or hiking in Sherwood Forest.

Seamus and I opted for a ferry ride to the Isle of Inchagoill to see one of Europe’s oldest carved stones, the grave marker of St. Patricks’ nephew, which was placed there somewhere around 500 A.D. It’s curiously completely unshielded from the elements, vandals or the average tourist smacking it with a Pringles can. 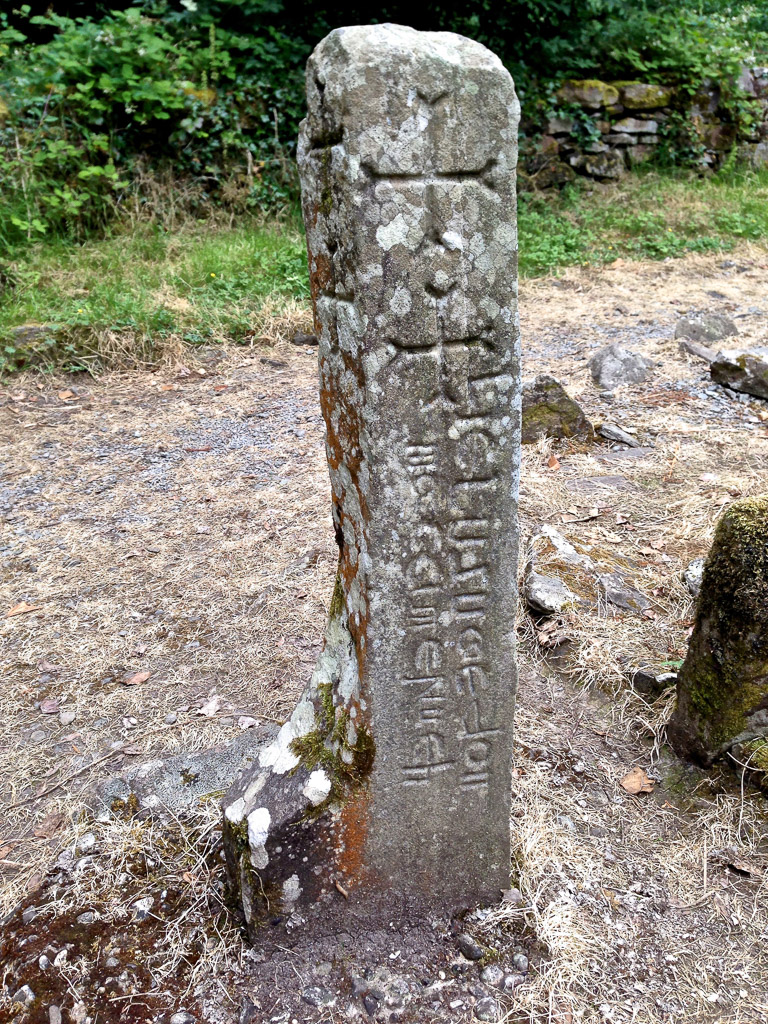 One of the oldest carved relics in Europe does NOT need no stinkin’ museum to protect it.

I had also convinced Seamus to sign up for the falconry because I pretty much thought that this was the best idea I had ever had. That is, until Seamus reminded me that they eat rodents and rabbits and that they might kill one and bring it home to roost on my hawk-catching glove. This sent me into a panic. Dead bunnies were not part of my plan. I breathed a massive sigh of relief once our instructor and guide explained, that no, this is not how the school runs it’s hawk walks. That no, I would not have to stand there sobbing as my hawk bloodily feasts on a field mouse, dining at my outstretched hand like its the king’s table at Medieval Times. 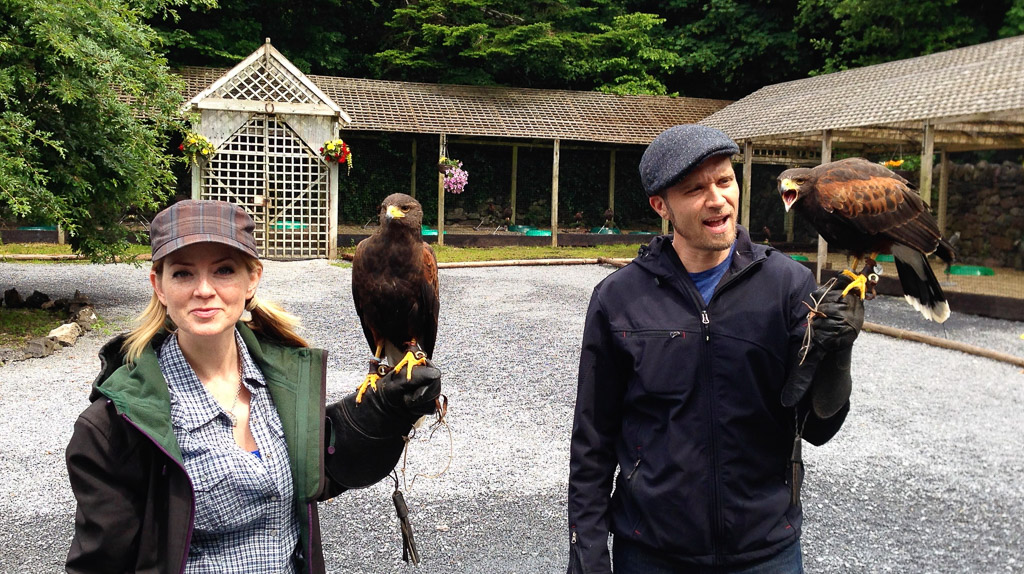 Don’t they say that hawks begin to look like their owners? 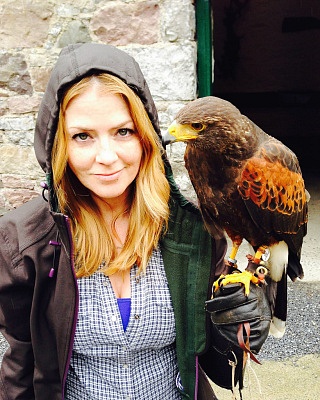 I’m clearly an expert at this point.

Falconry was one of the highlights of my entire trip to Ireland, balancing these beautiful, intimidating birds on my fist and then launching them up into the sky. The instructor would whistle for them, and I’d assume my stance, left arm aloft and watch while my little raptor buddy Aztec would return to rest on my outstretched arm. I am one with nature! I am one of those literary characters with a bird sidekick like Perseus or Harry Potter or, yes obviously…Ladyhawke!

The tiny town of Cong is definitely worth a spin. It has a church in ruins, The Quiet Man filming locations a-plenty and a one-way street that makes a loop through the entire village with a few nice restaurants and cafes in which to dine. My favorite part is that every senior citizen there (and there are more than a few) was an extra in the movie and are happy to tell you the story of how they shook John Wayne’s hand or danced with Maureen O’Hara. It’s a fair bit more than adorable, and definitely worth a stop, even if you don’t spend the night. 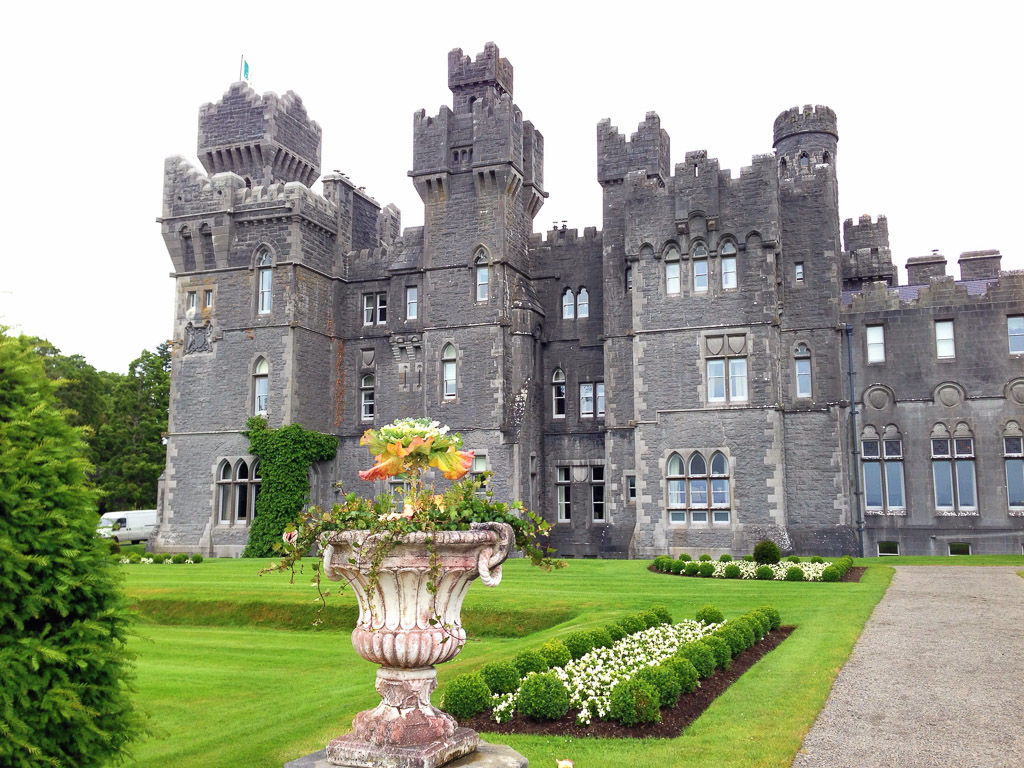 Ashford Castle is like a peaceful stay at Downton Abbey. As long as Edith doesn’t show up.

Though I recommend that you do. Cong is one of my favorite little spots in the world. And Ashford Castle, with its ability to conjure up knights and maidens, Victorian aristocracy and homespun Irish hospitality, lived up my decade of romantic expectations. And then some.

How to Spend a Royal Weekend in Ireland

Dine in a dramatic atmosphere at Cullen’s at the Dungeon

Spend the night like a royal at Ashford Castle

Explore The Quiet Man Filming locations, the movie that made Cong famous 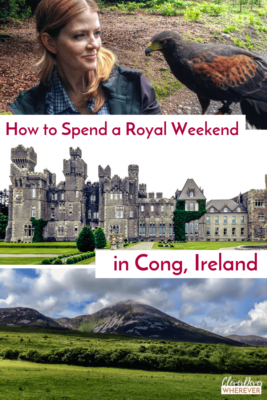 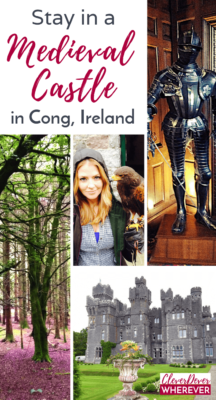 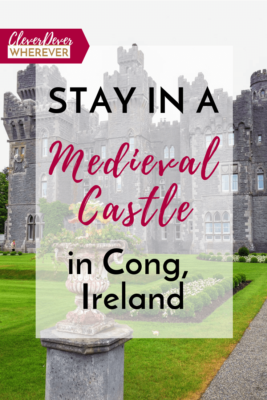 Tweet
Pin2K
Share415
2K Shares
Tags: Ashford Castle•Cong•Europe•Ireland
OlderMy Heart Really DID Go On in Belfast
Newer“Cong is the Most Beautiful Place in the World”