How to Have an Encounter With Wolves in Canada 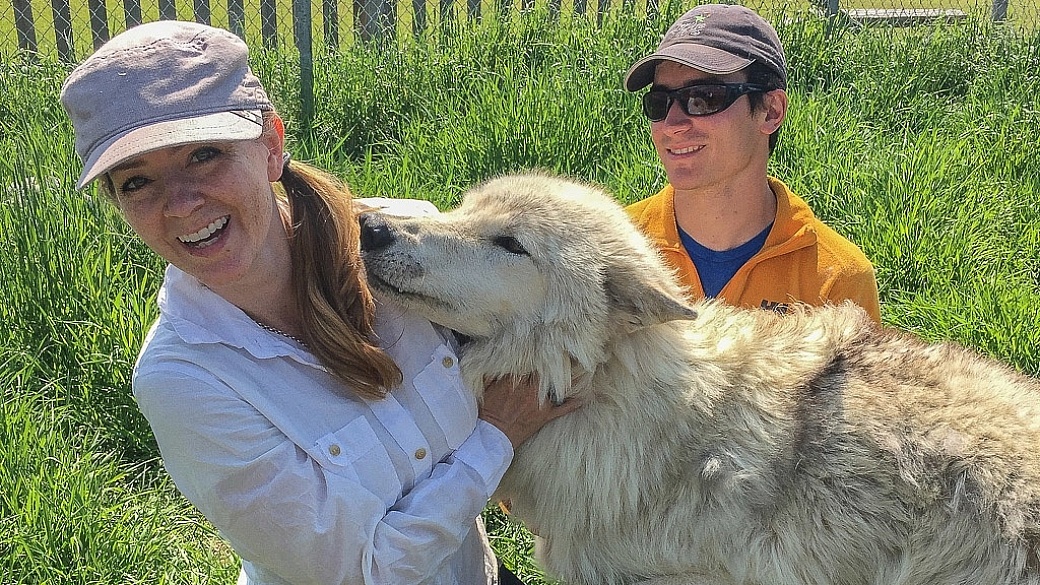 How to Have an Encounter With Wolves in Canada

I wasn’t nervous until I completed reading the waiver.  “Why do you need to know if I have any allergies?” I ask Derek, our guide.

“This is so the paramedics know what to give you if you are unconscious in the ambulance.”

“Why would I be unconscious in an ambulance?” I may have gotten emphatic here. “We’re hanging out with wolves in Canada, not feeding lions.”

We’re at breakfast at Ferme 5 Etoiles (Five Star Farm), in the Saguenay-Lac-Saint-Jean region of Québec, Canada. It’s a wild-animal sanctuary of sorts, with a few lovely little guest rooms and a restaurant. Derek is going over the protocol of being inside the pens with their rescued wolves; something I’ve been excited to do since I started planning our Canadian road trip.

“Do wolves like maple butter?” my friend Rachel spreads another blade-full across her toast. “I don’t want to give them any reason to want to eat me.” She’s trying hard to appear serious as she suppresses a giggle. She’s on her second maple toast and, I might be wrong, but this may be the source of the laughing fit that’s consuming her.

“With our last generation of wolves, women had to disclose whether they were on their period. If they were, they could not go into the enclosure. The female wolf would smell that you were in heat and would assume you were after her man and go after you.”

“Is that why you’re asking for my relationship status on this form?” Rachel spreads maple butter on her pancakes, last meal-style. It’s on her fingers, her coffee mug, the place mat. She’s cracking herself up.

“It’s so we know who to contact as your next of kin.”

“I mean, does everyone need to know that I’m single?” She maple-butters her eggs. 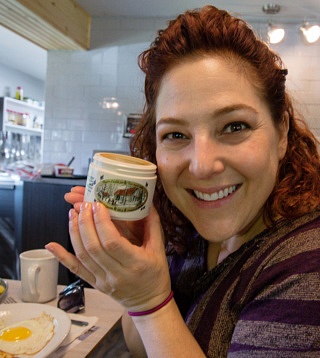 I really feel like I need her to stop with Sugar Rush 2016. The hand-churned maple butter they make here is crazy delicious, I get it, but I don’t need her standing next to me smelling like a stack of flap jacks while we’re meeting a pack of wolves.

“I think I’m getting the maple butter sweats!” she says, trying to catch her breath and laugh at the same time. She holds her syrup-covered right hand in the air, awkwardly. I put the lid back on the jar for her and hand her a wetnap.

I feel a very sticky afternoon coming on.

We head out to the wolf pen. Derek sits us down for a 45-minute lecture on wolves. Jacob, a male artic wolf, sizes us up from behind the fence.

“At one time wolves killed 3,500 people in France. Same as Russia, Great Britain. There was a root to the fear hundreds of years ago. In the last 125 years only two people have been killed by wolves.” Derek explains.

We learn more about pack life and Luna and Nalu – two sisters that were brought to the farm in the spring of 2013. They’ve been around people since they were very young, which was comforting. 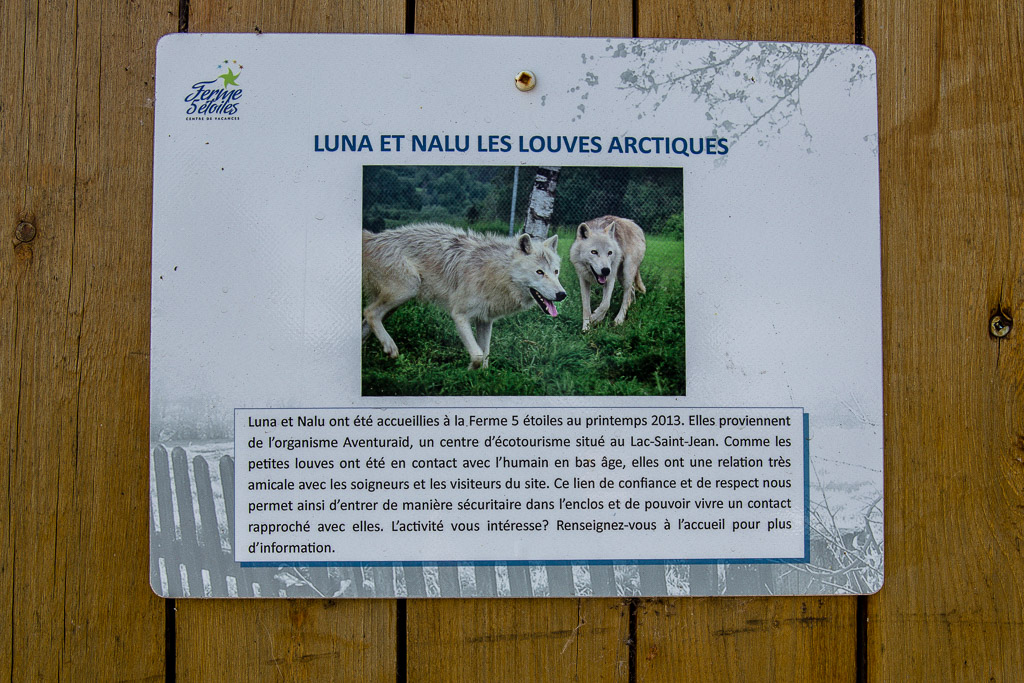 “One thing we know is that wolves are very transparent. Wolves stand up and growl when they do not like a person. If they are angry, you’ll know.” Derek continues the briefing that I tune in and out of. As a dog lover, I’m anxious to get in there and snorgle with these beauties.

Derek gives a few more instructions. “They love to play. They will jump for your face, pull your hair. Push them away. But never retreat. You need to make sure your arms are covered and tuck your long shirts in.”

Rachel and I pull our hair back, tucking it into our hats, and roll down our sleeves. Rachel tucks in her sweater. We look like train conductors ready to move some freight across the Union Pacific. I check her hands for maple butter remnants.

Derek leads us into the first yard where Nalu and Luna are, and issues a warning. “Go slow, put your backs against the fence.” As Nalu starts for us, I feel nervous, something I didn’t anticipate.

We slowly walk sideways, sliding against the chain links as if we are on the Mission Impossible team, trying to sneak into a hotel room from the outside. I feel a little trapped. Nalu is big. My urge to scratch behind her ears and ask “Who’s a goober face?!?” drains away. She sniffs me hard.

“You know how you’re not supposed to show fear, or feel fear because it makes animals want to attack you? What about that?” I ask, for a friend.

“It’s okay to be nervous, the reverse is worse. If you go in over-confident it’s not a sign of respect and the wolf will go after you.” I hope Derek notices the respect I’m currently sending out. We move deeper into their lair.

I feel a tug at my boot and notice Nalu is biting one of the buttons. Reflexively, I back away.

That seems so mean. Also, we’re sort of the same size. Instead I freeze, a standard panic mode for me. Derek comes over, picks up the 70lb wolf and puts her down on her back.

“That was unexpected.” Rachel looks at the wolf, supine on the ground.

This is not how I pictured this encounter going of hanging out with wolves in Québec. Suddenly there are two wolves. Luna, either curious about the commotion or lured in by my maple-scented friend comes over rather quickly and stands up next to Rachel, who turns into a statue. Luna puts her mouth around Rachel’s forearm, but doesn’t bite down. 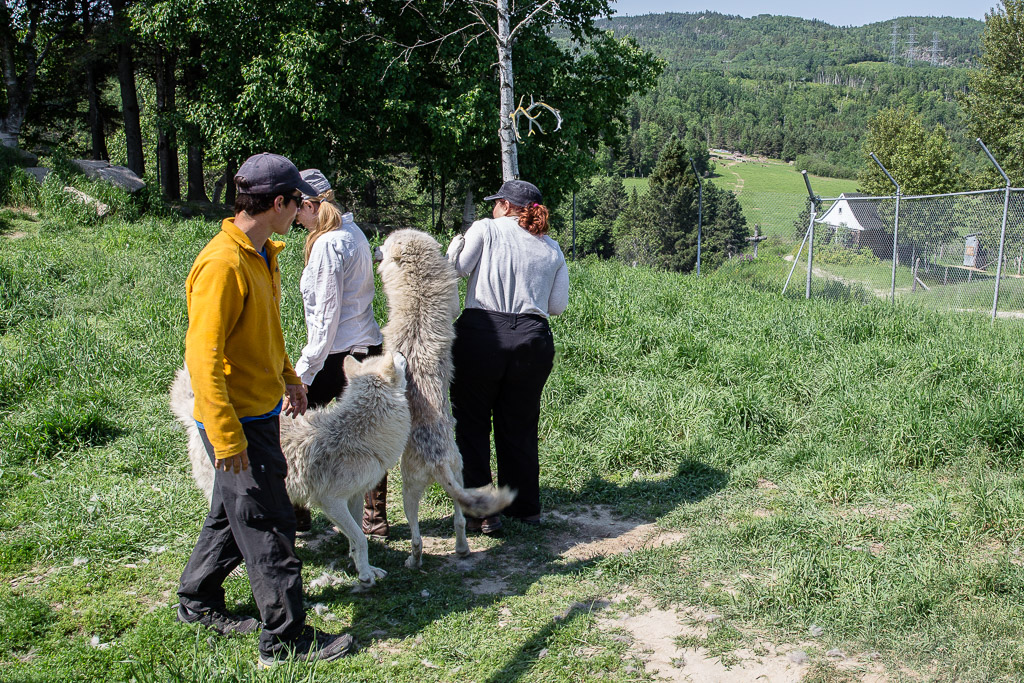 Seconds later Nalu comes for her sister, knocking her down and pinning her to the earth. Teeth clash and they wrestle, almost knocking me down. I try to move away. No, wait, don’t retreat, don’t retreat! Luna resists and Nalu once again puts her mouth around Luna’s throat to subdue her. I retreat.

Derek is so calm right now. “Nalu is telling her sister “this is not how you treat guests, these are our friends.”” 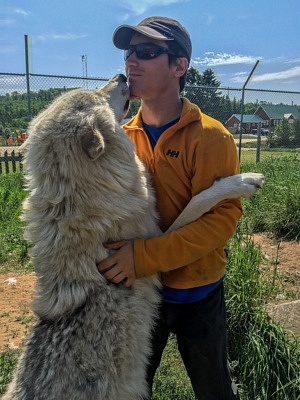 The wolves separate and Luna skulks off. Nalu runs to Derek, licking him, as if asking for approval. Rachel and I stare, wide-eyed at each other as if we’ve just escaped death. Stephanie keeps taking photos from outside the pen.

Nalu is so beautiful. I’m overcome with her gentle spirit and I really want to give her a hug for looking out for us. Not that we were ever in any danger, but Luna was in a mood and Nalu would not allow it.

I advance to her and extend my palm. I crouch down. She begins to lick my face. That wild sense that anything can happen seizes me, and I’m awash with apprehension and love. She continues to lick me.

I pet the thick white fur behind her ear. Lick, Lick! “Okay, Nalu, that’s great.” She’s really intense, as if she’s tasting me. Lick! Lick! “Easy, I only had one maple butter toast.” She almost knocks me down.

It’s not a moment I would trade for anything, in the presence of a great beast made gentler by years of love. They’re certainly not tame by any stretch, but a little bit of courage, respect and perhaps the promise of maple butter go a long way towards making a connection. 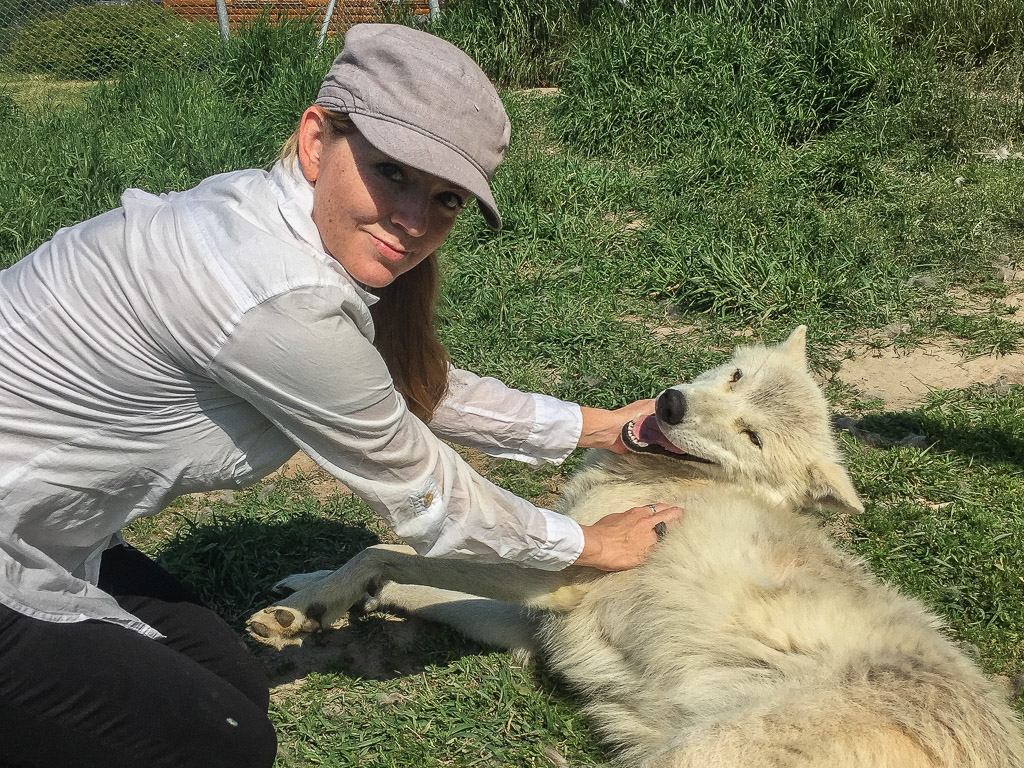 These wolves have an amazing sense of smell. 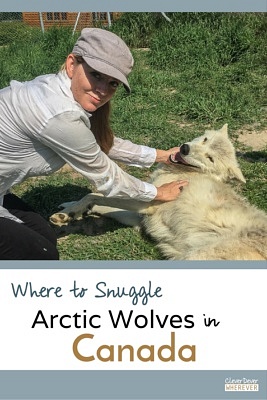 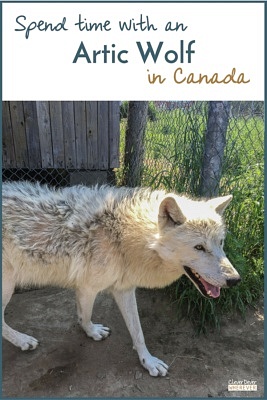 Why Your Heart Will Melt When You Visit Ferme 5 Etoiles

“I just called a guy to put on his bear suit.” Such is the sense of humor of Derek, our guide tonight to watch black bears in their natural Canadian habitat. We’d been briefed about how this bear viewing was going to go down during our...

Where to Snuggle Baby Goats in Québec

During my amazing Canadian road trip, I was super lucky to get a hot tip on a goat farm. My friends Rachel and Stephanie and I stopped in at the Chevrier du Nord (Goatherd of the North - gah!) where the Pilote family raises...

“Squirrel! Incoming!” I yelled up at my friend Rachel who called dibs on the loft bed of our tree house. Our cozy cabin perched or hung, or however it magically stayed 20 feet up in the forest’s canopy, impaled on a 40-foot birch (or pine?) tree. Having a squirrel inside your room is...

“I took my two dogs Victor and Molly and went foraging for the items myself.”

“I feel like a Druid, searching for herbs, creating things.” Nathalie Thibault puts what looks like a teeny pinecone in front of me. We’re in the packed Café du Presbytère, a cozy restaurant inside of one Chicoutimi’s several repurposed churches. There are more churches than parishioners in the boroughs of...

Read more
Tweet
Pin222
Share168
390 Shares
Tags: Canada•North America•Quebec•Saguenay-Lac-Saint-Jean
OlderStaying in a Tree House When You’re Afraid of the Dark
NewerWhy Your Heart Will Melt When You Visit Ferme 5 Etoiles