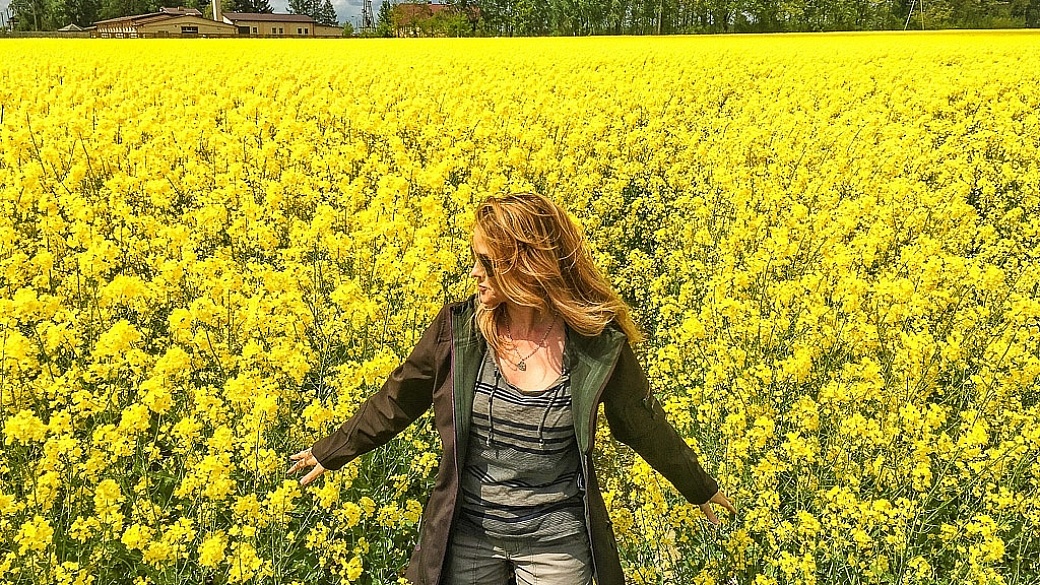 Tales of an ancient forest deep on the border of Poland and Belarus ping across my consciousness like a tiny flight recorder begging to be found. Maybe just a faint sound here, then years later another pulse, reminding me of its existence.

And now I can no longer ignore it. I don’t know why the thought of visiting this place strikes such a cord with me; why the minute my husband brings up the idea of heading there that I immediately say “Yes!” In truth I know very little about it or why I want to go there, but I do. 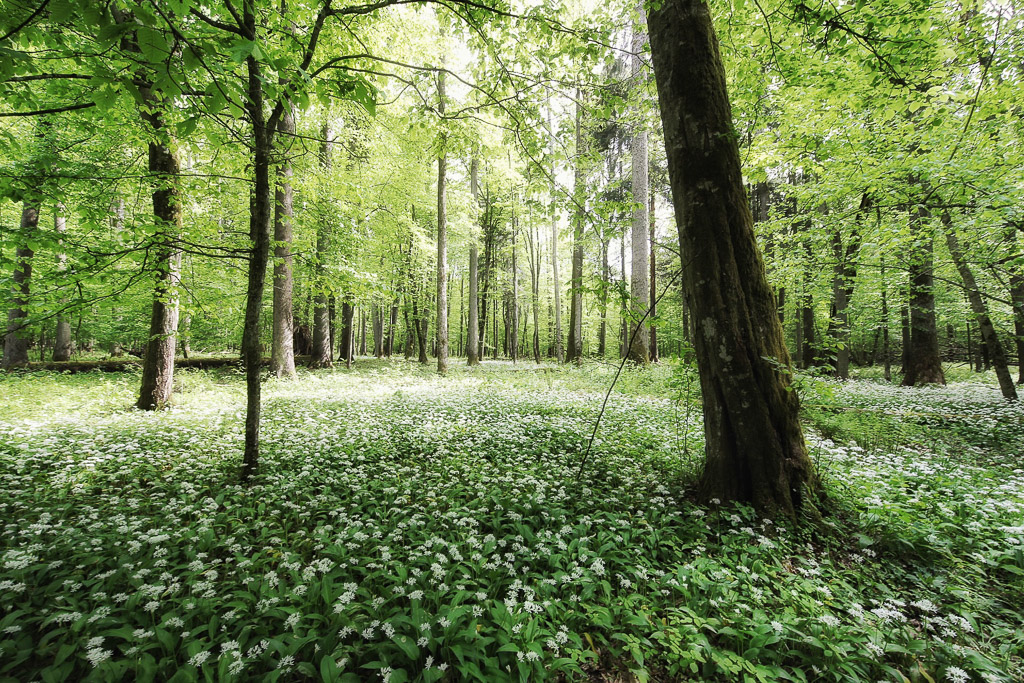 The ancient forest of Białoweiża, Poland. Once annexed by Russia for the tsar’s exclusive use.

Being 34% Polish (I know this from a recent ancestry DNA test) I like the idea of seeing Poland as part of my summer vacation. Our lineup for this trip includes Warsaw, Białowieża and Krakow. And I’m most excited for this forest, one that is pretty much unheard of in the US, but has inspired songs in Russia and wistful, romantic remarks from Polish people whenever I say I’m visiting.

It’s a four-hour drive from Warsaw (eight from Krakow), which in May took us through brightly colored rapeseed fields of yellow, and intermittent rain showers. The roads are a combination of highway and one-lane, so if you’re planning on doing the drive get used to the daredevil passing that the Polish often do. Into oncoming traffic. I’m not hyperbolizing. 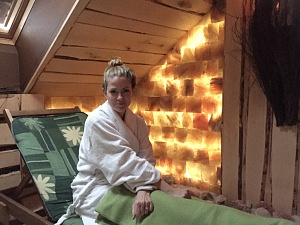 I have no idea why I’m sitting in this salt cave exactly, but apparently I’m getting healthier by the moment.

We almost don’t realize we’ve pulled into Białowieża. It’s a very small rustic village on the edge of the forest. We checked into the Hotel Żubrówska, which has a new pool area including the hot/cold Scandinavian sauna situation and a spa center with a salt cave that we absolutely had to try. Though with the lack of signage in English we had exactly no idea why we were sitting in said salt cave; but we laid there anyway in our robes, soaking in the unknown benefits.

Essentially, there are two different parts to the primeval forest. There is a park that is open to the general public. You can hang out all day in this park, just lolling about. There are also options to take carriage rides, bike on paths or hire guides to take you to “Beaver Kingdom” which sounds far more exotic than it might actually be. Though hey – I’ve never been to a Beaver Kingdom and frankly I’d like to see how these guys structure their little rodent paradise. I missed out on that this trip. 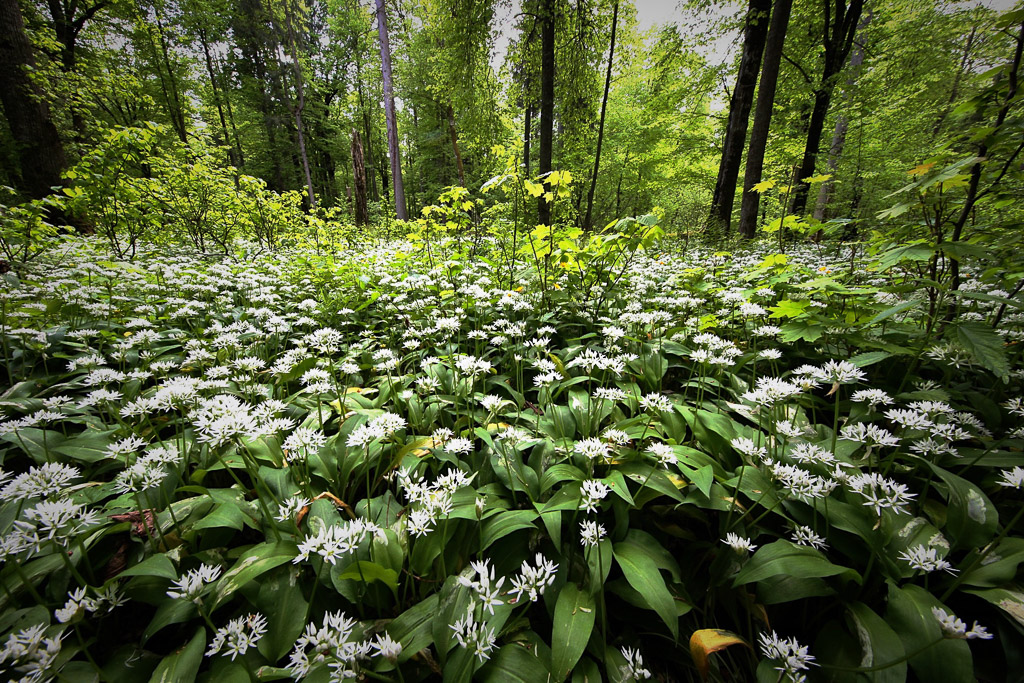 The second part is the strict protection zone and can only be entered with a licensed guide. We chose this option so that we could see this last fragment of primeval European lowland forest. Through the centuries it has been occupied by peasants and hunting royalty alike, but now the hundreds-year old trees live out their lifespan untouched. They are never felled and when they die they fall over on their own, regardless of who is standing there. Which is why you need a guide with you to say reassuring things like “Ehhh, we better move along quickly” while you hear that ominous creaking sound somewhere nearby. 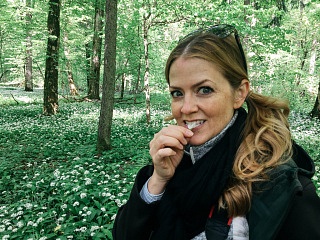 I’m a survivalist! For as long as I can eat these tiny garlic-flavored flowers, that is.

Sławomir, an experienced forester, took us on a three-hour trek through the protected area, naming every single tree and giving us a rough idea how old each of them were. He showed us how to find tiny radishes and wild garlic and now I’m confident that on a survival scale of one to five Seamus and I were about a two. Because eating wild garlic blooms can only last you so many days.

To get into the protected area you must first stop at the park. As we glance at beautiful old gatehouses and a modern building which is now a ticket office and hostel, Sławomir explains that this was where the tsar’s royal palace once stood, before it was burned in 1944 during the German evacuation of this area. This palace, built over six years and completed in 1894 for Tsar Alexander III and used often by Tsar Nicolas II and his family was suddenly the aha! moment for me. 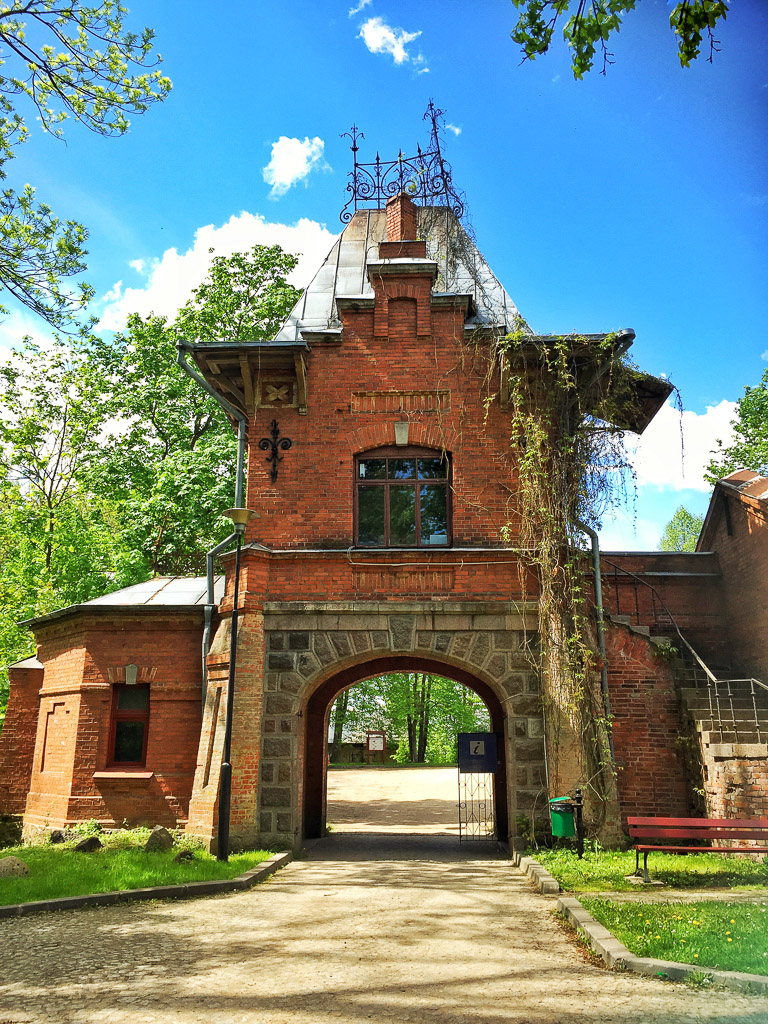 The old gatehouse, built by Tsar Alexander III in the late 1800s. Why does it look so familiar??

You might remember that as a child I was obsessed with tragedy. I ALSO had an overactive imagination, and was fairly certain that I was in fact Anastasia, the youngest daughter of the Romanov family.

Casting all reason, logical timeframes and obvious familial resemblances aside, I used to dream that I was former Russian royalty. I liked Mikhail Baryshnikov! I could read Cyrillic! I enjoy the occasional beet! These are all totally obvious signs of my long-lost lineage, right?

Immediately I am captivated with Białowieża. It’s so clear why I needed to come here. Because I used to spend my summers here back in the 1900’s! Duh.

And Then There’s The Food

In my head Polish food often falls into two categories: “hearty” and “meaty.” But I have to say wow; everywhere we ate in this town was really delicious and totally doable, even for a vegetarian. 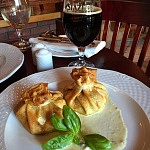 From the restaurant at the Hotel Żubrówska, spinach bundles in blue cheese sauce. 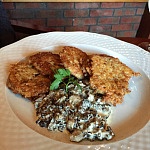 Dinner at Hotel Żubrówska, buckwheat pancakes and mushrooms in cream sauce. So good. 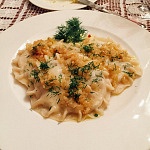 Loving my pelmeni at Carska restaurant.

Our last night we went to a restaurant called Carska. Thought by some to be a bit stuffy, the restaurant is set out a few minutes drive from town right next to two magical rails of history, and I loved it. Carska is housed in what was once the tsar’s train station next to the private railroad built for Alexander III and used by my real family the Romanovs for trips to the country in the early 1900s. 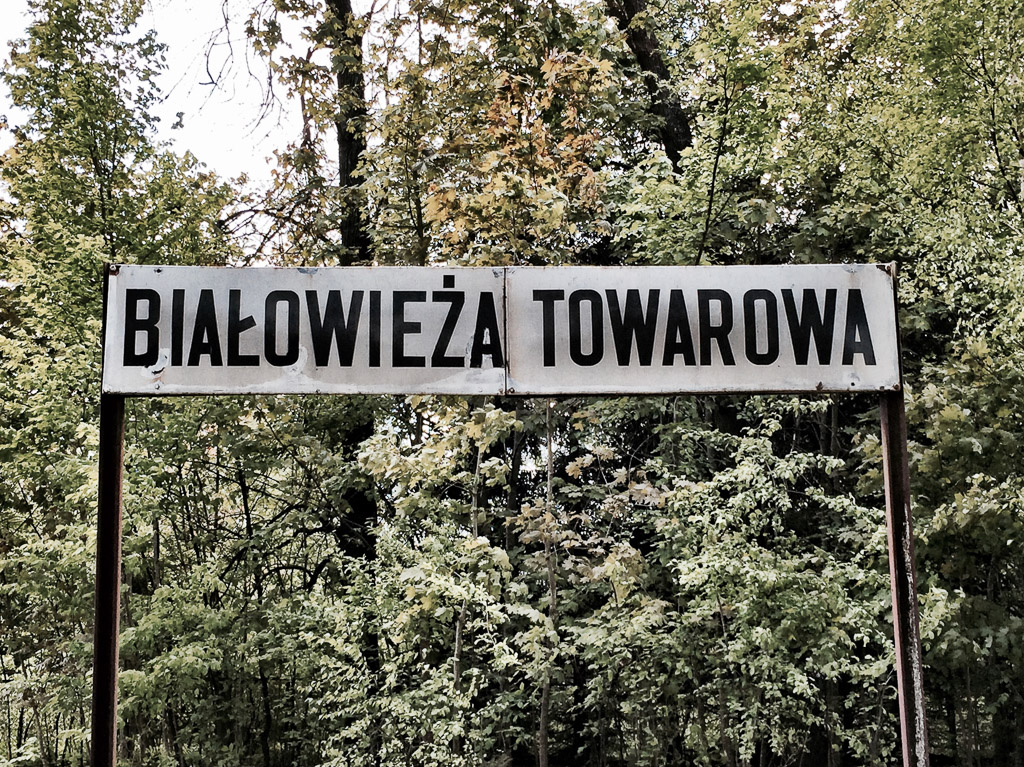 The tsar’s train station still stands, though the tracks are in decline, serving only as a memory of what once was. 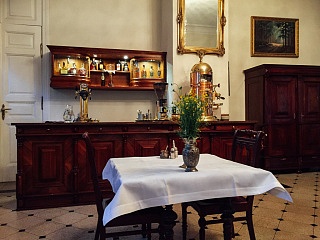 I love a good samovar. Carska restaurant made me feel like I was smack in the middle of a Chekov play.

The interior of this restaurant is all imperial Russian paradise. It’s like a set designer came in and threw up 1906. We stepped inside and instantly the high ceilings, fancy tablecloths and samovars transported us (me) to a bygone time. I start wondering if Rasputin had eaten here? He must’ve, right? Fortunately for me, Seamus appreciates Russian history as much as I do, and doesn’t give me too many strange looks as I savor my pelmeni, swept into my royal fantasy.

Białowieża is definitely a tranquil and beautiful place, and if you have the chance, it’s somewhere you should visit at least once. Except for me, because, you know, I’ve now visited twice. 😉

How to Spend a Royal Weekend in Poland

Żubrówka Restaurant – inside the hotel

Private tour to the restricted area of the forest

Hang out in the park for some Owl and Birdwatching

Hire guides to take you to Beaver Kingdom

Enjoy the Wildlife and bison preserve for the animal lovers

It’s always a good idea to learn a little bit of the language wherever you go. Here are a few vital words in Polish to get you started: 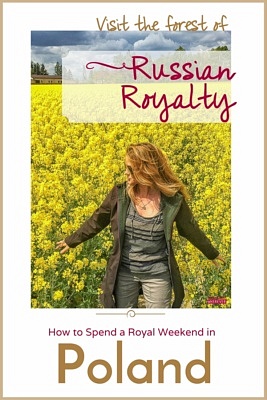 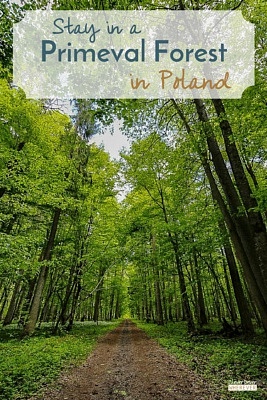 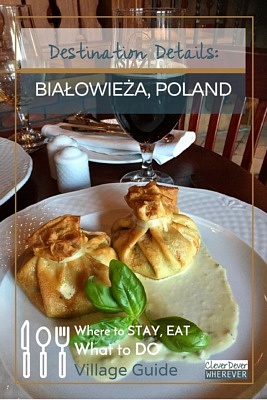 Straddling Poland and Belarus, the Białowieża Forest is the last bastion of a once vast primeval forest that stretched out across the lowlands of northeastern Europe. Home to kings and tsars, peasants and soldiers, the forest has...

Do I Need to Visit the Salt Mines of Wieliczka?

In today's installment of "Should I Visit This Tourist Attraction?" I go to the Salt Mines of Wieliczka so you don't have to (unless you want to). About twenty-five minutes outside of Kraków, Poland is a series of salt mines that are some of the oldest in the world. And until recently were still in use. It is said...

Warsaw: Everything New is Old Again

Most of Warsaw was destroyed in World War II. The Polish do not put up with destruction like that, so the citizens undertook a five-year restoration project immediately after the war to meticulously rebuild their beloved historic town. Though it looks like and feels as if... 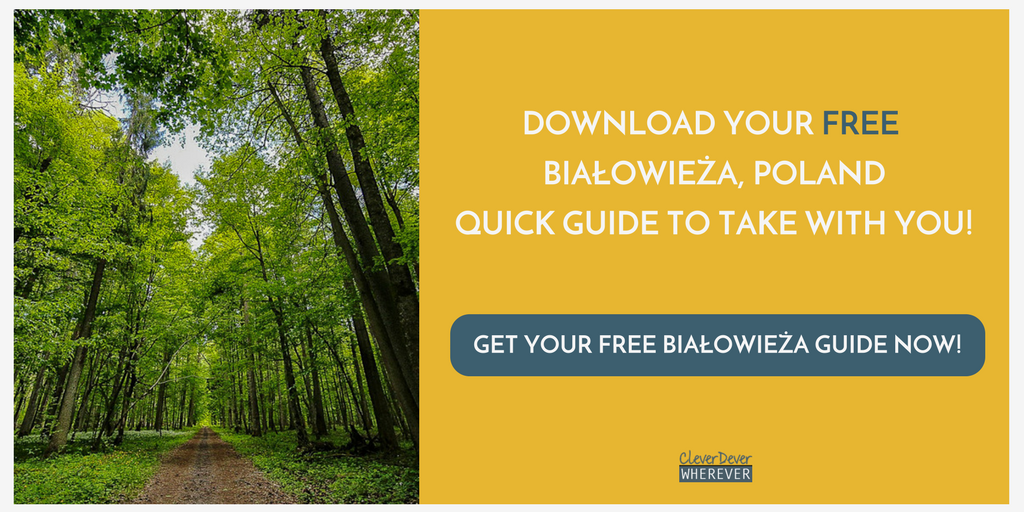