From a Gondolier’s Point of View in Venice, Italy 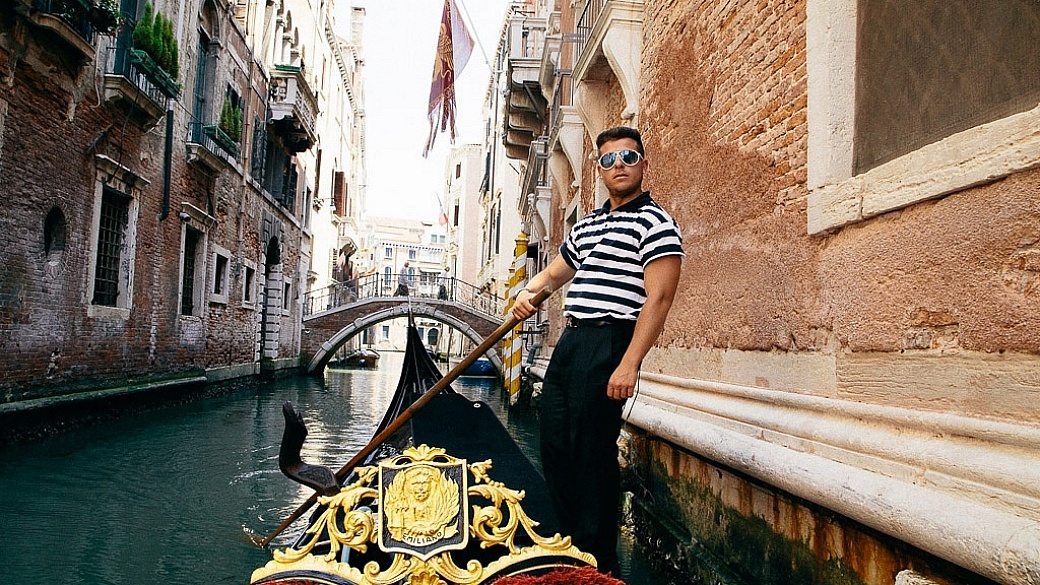 From a Gondolier’s Point of View in Venice, Italy

We almost didn’t take the gondola ride. We both hemmed and hawed about it. After watching tourists with selfie sticks being boated around Venice for days, it stoked my rebel instinct to do the opposite of what everyone else was doing.

As we’re getting ready to leave for Florence this morning, the weather is glorious. Maybe a spin around the old canals isn’t a bad thing, right? This is, after all, a truly authentic experience. It’s not like some kid named Cody is rowing us around the inside of a casino mall in Vegas. Or we’re being serenaded by that dexterous Hamburger Helper glove that traumatized me in my youth. 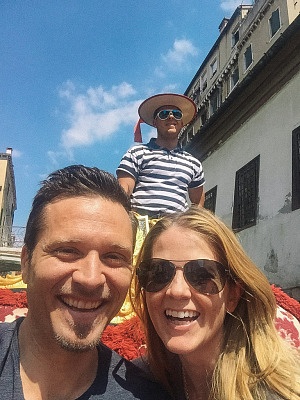 Pretty sure the smiles all around mean we did our anniversary right. Even Enrico thinks so.

The gondoliers here are real Venetians – having the job passed down to them from their father is the only way to be one. Seamus is suddenly inspired to give it a go, so now the decision is fully on me. I can’t say no. Otherwise it’ll be my fault when we both reminisce about our wedding anniversary in Venice, Italy, with that nagging feeling that we forgot something.

Our gondolier is a young guy named Enrico. He’s a cool cat as he rows along with one arm, keeping us from scraping buildings by pushing the foundations away with his foot. The great thing is that because he’s a local he can tell us all about the city as we go. He points out windows as we pass by. “You can tell the age of these houses by the style of window,” he says. “Byzantine versus square. The Byzantine windows mean it’s 800 – 900 years old; the square ones mean it’s only about 400 years old.”

It’s a city like no other that I’ve been to, the buildings at once romantic and ornate as they rise up from the water. Enrico is taking us on the small canals only, in the older part of the city. I decide to get his take on the level of tourism, being that he is both born and raised in a city of dwindling locals.

“Venice now is like Disneyland. There are not a lot of shops for the locals, only for the tourists. People here who don’t work with the tourists are frustrated. But I understand it, because everyday I work with the tourists. We say that during the day Venice is a factory, but at night, is a convent.” He’s referring to the fact that so many tourists come for the day, and stay elsewhere, such as on cruise ships, at night.

We continue to glide through the smaller canals in the older part of the city. Enrico explains that all gondoliers must purchase their own gondolas at a price of about €60,000. He says it takes about 10 years to pay it off and 15 years before the profession starts to become profitable. 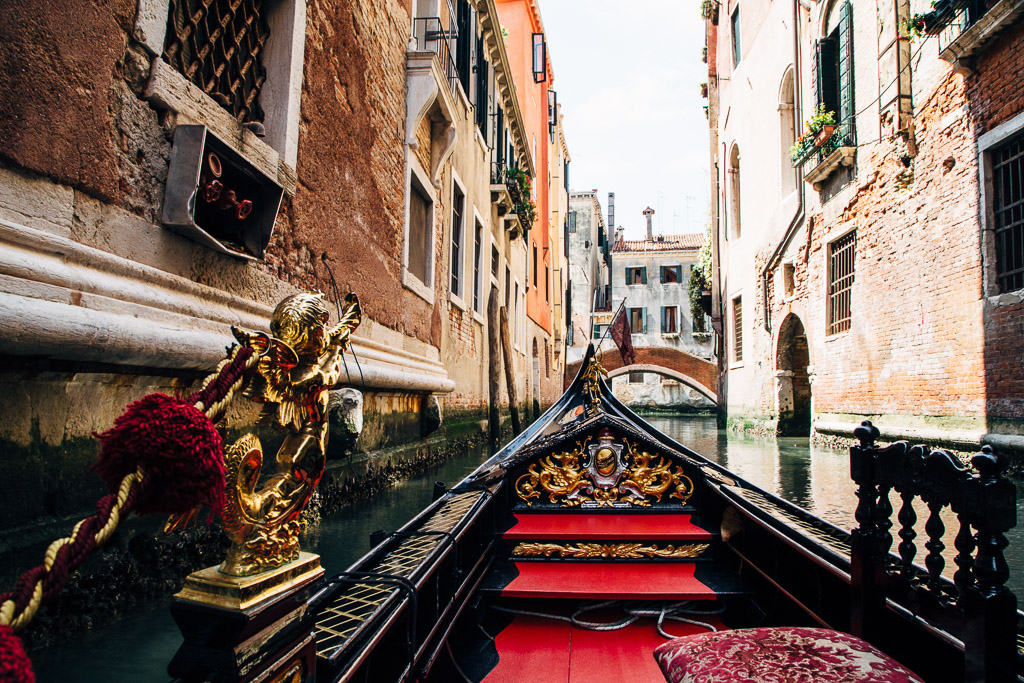 It’s wild to think that this small boat with no moving parts costs more than a car.

“We set our own hours, and take time off when we want.” I begin to wonder if there is a Gondolier’s local union, and what kind of team-building events they might have, because bowling and games of horseshoe seem out of the question. I don’t ask.

Enrico tells me that all boys learn to start rowing in the one-arm style that gondoliers employ, from a very young age. It is impressive if you think about it. They don’t turn in endless circles like I would if I tried it.

I’m curious where his favorite local place is. “Away from here,” he jokes. “There is an area in the north where there are not many tourists, so you can walk normally.” I look up and notice that we are the subject of about 10 tourists with cameras on the bridge as we glide under. Do we wave? Kiss? My urge is to wear one of those Venetian masks so that their vacation pictures look freaky yet authentic, but I didn’t buy any. 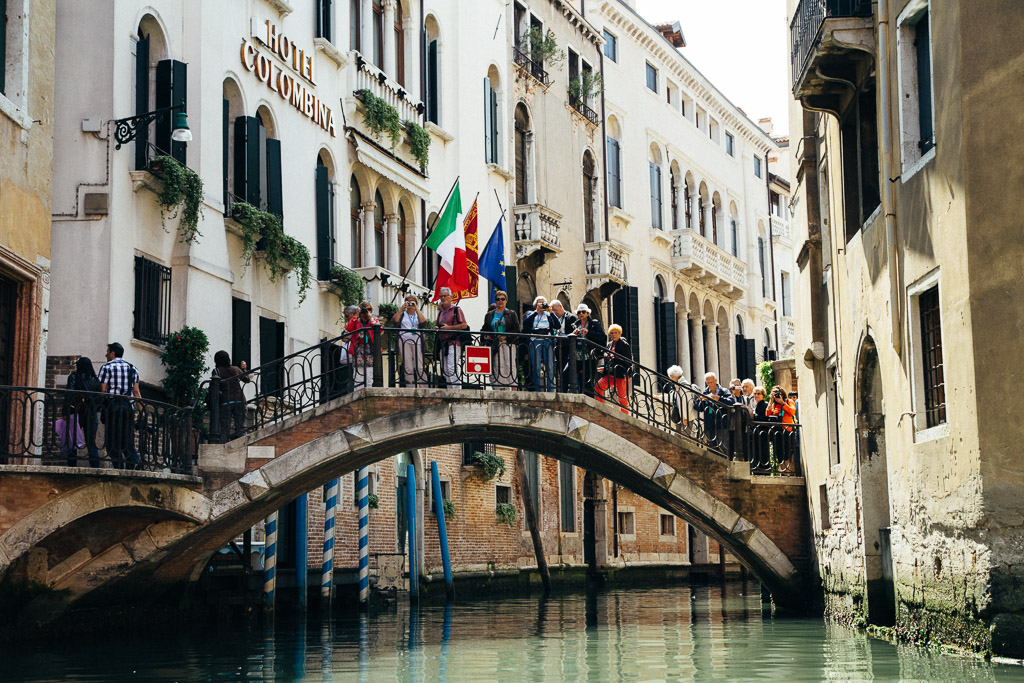 I ask Enrico about his favorite places to eat. “There are some places that I prefer. You cannot use Trip Advisor. That’s bullshit. If you are in Venice you cannot have pasta takeaway in a box. That is what tourists rate as the number one place to eat here, and it’s bullshit. Vinne da Gigio is great, one of the best in Venice. You can also try Fiashcetteria Toscano.”

It’s amazing how quickly that 30-minute ride goes by. We’re already pulling up to the dock. It’s then that I realize how something that seems so touristy can really be authentic. I enjoyed seeing the city from that perspective, especially on the older canals where there was less traffic and almost no waves.

And maybe I’d even do it again, but next time with a bottle of Prosecco at sunset. But I’m drawing the line at hiring a singer to serenade us. I’ve got a warbling white glove inaccurately advertising the culture burned into my memory with that one. 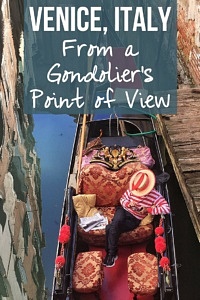 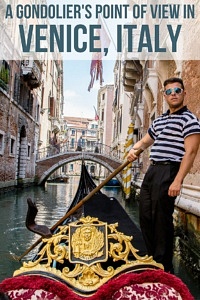 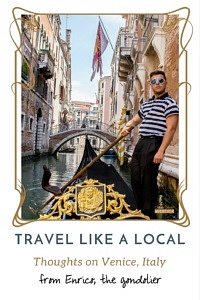 With upwards of 60,000 visitors a day, tourists typically outnumber locals in this stunning, sunken Italian city. The beauty of it can be mesmerizing, with canals winding through it's heart and bridges arching over each one as if created by a Hollywood set designer. If I could offer one piece of advice for visiting...

We Got Scammed in Florence So You Don’t Have To

Seamus met two charming, well-dressed guys on the steps of the Duomo with credentials around their necks. Before the afternoon was over we were out €40, two hours of our lives, and being threatened with the mafia. Climbing the Duomo was really the only thing on my list of things to do in Florence, because of course,...

First, let’s get it straight. It’s spelled BOTH ways. Piedmont is how most English speakers say it; Piemonte is how the Italians pronounce it. And me. I like to say Piemonte! with an upward lilt (and an exclamation point) at the end because it makes me feel authentic and perhaps like I might live there one day....