Make Believe and Disaster Relief in the High Desert 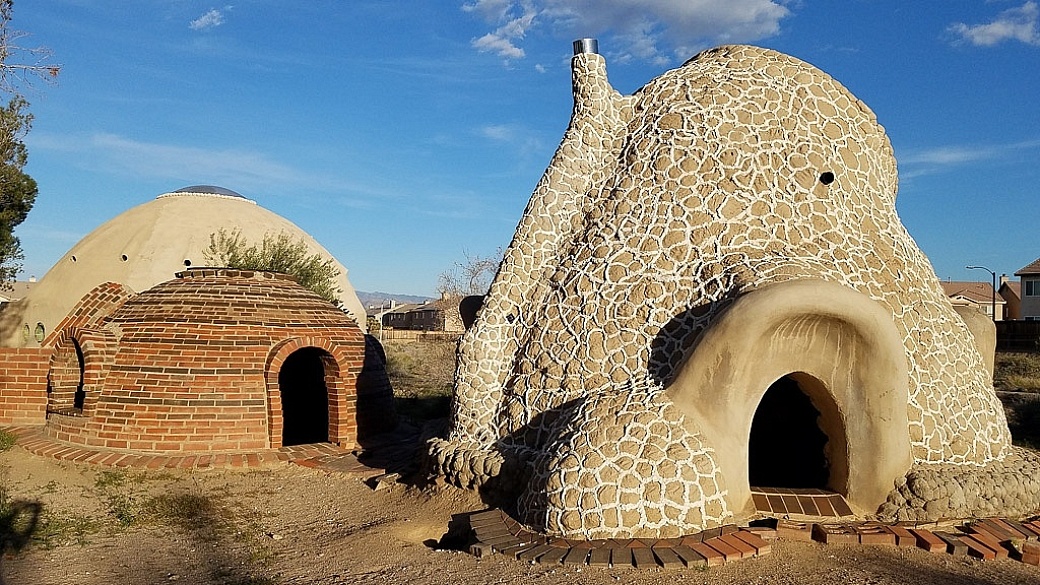 Make Believe and Disaster Relief in the High Desert

“We tell ourselves that every animal in the animal kingdom builds its own house, but people aren’t smart enough to do it. We have to go to college for that, right? We have to become architects. But that’s not true, we’re absolutely capable of building.” 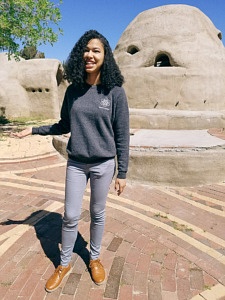 Alice Cordova, a young English major and instructor at the California Institute of Earth Art and Architecture, or Cal-Earth, leads a small group of us actors and filmmakers through her outdoor classroom.

Standing amidst vaulted adobe homes that conjure a shire, the acreage of the campus stretches across California’s high desert in Hesperia. The rest of the sprawling land, dotted with various domed structures looks like a sci-fi space settlement. 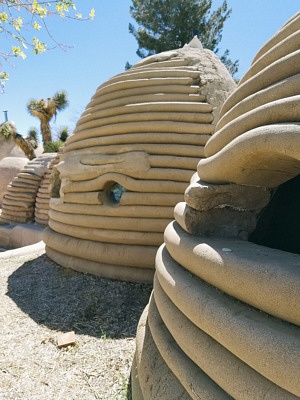 As I wander through these beguiling structures I’m struck by how fun these homes appear. Like hide-and-seek-campfire-ghost-story fun. Though not intentional, the look is part of the draw: the idea of being able to build your own Hobbit community. But Cal-Earth Institute is far loftier, and more mature, than my desire to create an entire Hobbiton.

I feel trivial for fantasizing about meeting Luke Skywalker here, but the whole place resembles a movie set. In all fairness, today it is. It’s our movie set, I’ve come to film episode 2 of my virtual reality series amongst the vaulted homes dotting the desert.

“Earth turns to gold in the hands of the wise” –Rumi 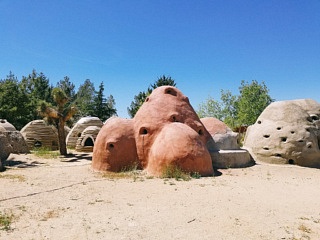 Nader Khalili, a decorated Iranian-American architect, founded Cal-Earth in 1991. Nader’s quest was one to empower millions of the world’s poor, refugees and displaced persons to build homes using “the earth under their feet.” These building techniques came from his continued meditation on the poetry of Rumi, a 13th century Persian poet and mystic.

After Mr. Khalili’s passing in 2008, his children Dastan and Sheeteh have continued to push his Cal-Earth vision forward. Here, anyone can come and learn how to use the “timeless materials” of earth, water, air and fire to build shelter within a few days.

Especially useful in disaster-prone areas, Alice explains that the earth-resistant, flood-resistant homes one learns to build at Cal-Earth fill an extremely important need.

“With the earthquake in Haiti which was in 2010…we’re not even thinking about that anymore, but they are! Today hundreds of thousands of people are still living in tents, which is just kind of a horrible living situation. It’s not sanitary, it’s not safe.”

Baby dust devils swirl in the distance, the wind blows unobstructed across the flat golden earth. It’s an exceptional location for learning to build these habitats.

“This is ancient architecture just with modern supplies.” 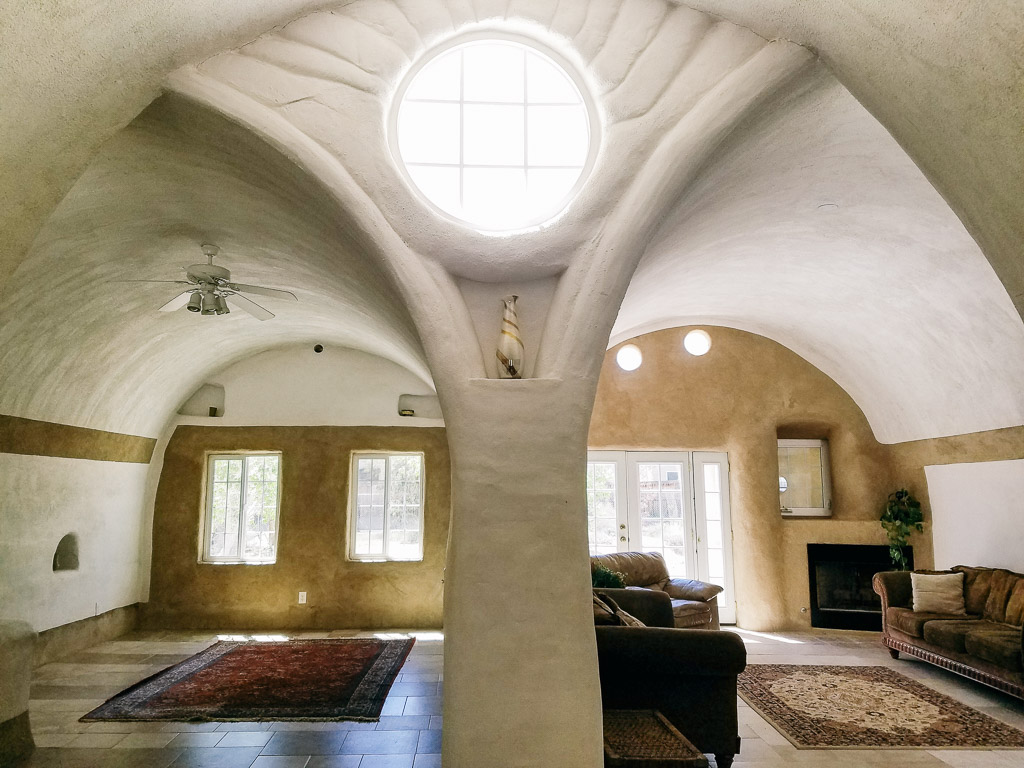 Alice lays out the tenets that guide eco-friendly structure building:

“With alternative architecture I think sustainability is thrown around a lot, but we try to take a really, really practical view of sustainability, which is not only can the earth continue to replenish the materials which it can, but also when you think about your human resources, is every person capable physically of building this?”

2. Is it possible spread the education?

“We try to give it to people in a way that’s not so scientific because not everyone can do that or has the resources to do that.

And in different areas you could be dealing with people with different literacy levels. Or you’re trying to explain it to someone who speaks a different language than you, and that’s important to be able to be cross-culturally accessible too.”

3. Can everyone afford to build it?

“There’s this beautiful sustainable eco-home that I was following. It had this special kind of bamboo flooring and the way the windows were set up it like held in heat in the winter. It was just this amazing, amazing, house… that cost 8 million dollars.

So that’s sustainable, but only if everyone has 8 million dollars. You look to this high tech magic technology bullet to solve things. Well, this is ancient architecture just with modern supplies.” 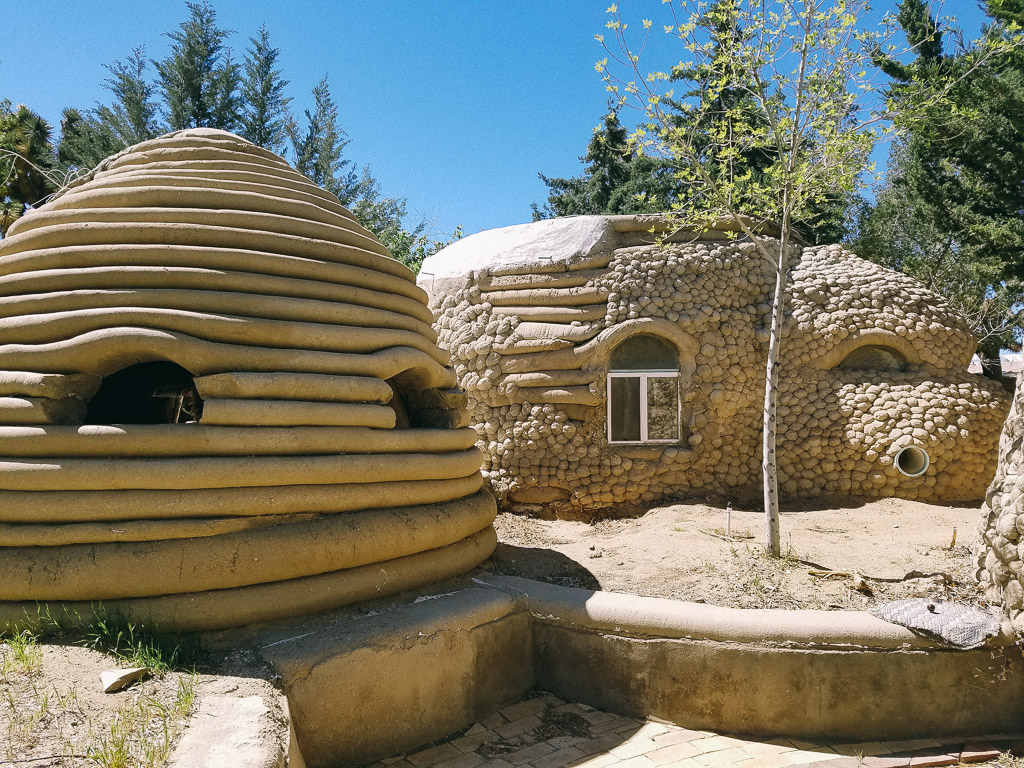 We’re using a drone with a camera mount to capture the odd beauty of the rounded homes from above. Our pilot takes it up on a test run above our heads; the sound of buzzing bees fills our ears. The faint tar-like smell of the creosote bush rolls past. 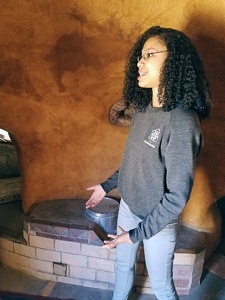 Alice takes us inside one of the Rumi-inspired homes to demonstrate the ingenious technology of the stove that’s built into the wall.

“This has a rocket stove, which is a type of high-efficiency masonry heater. We actually have one workshop each year that teaches specifically how to build this and integrate it into the super adobes.”

“So basically how it works, it burns so that the flames go sideways. You put a little bit of twigs, literally just branches, into here, and you can’t see it but you have a roaring fire this big because it’s burning this way instead of up, and then that spreads the heat more.

“It’s radiating heat from a fire that you burned three days ago, and it’s not logs, it’s twigs, so you can be just clipping your trees instead of logs where you pretty much have to cut a tree down.” 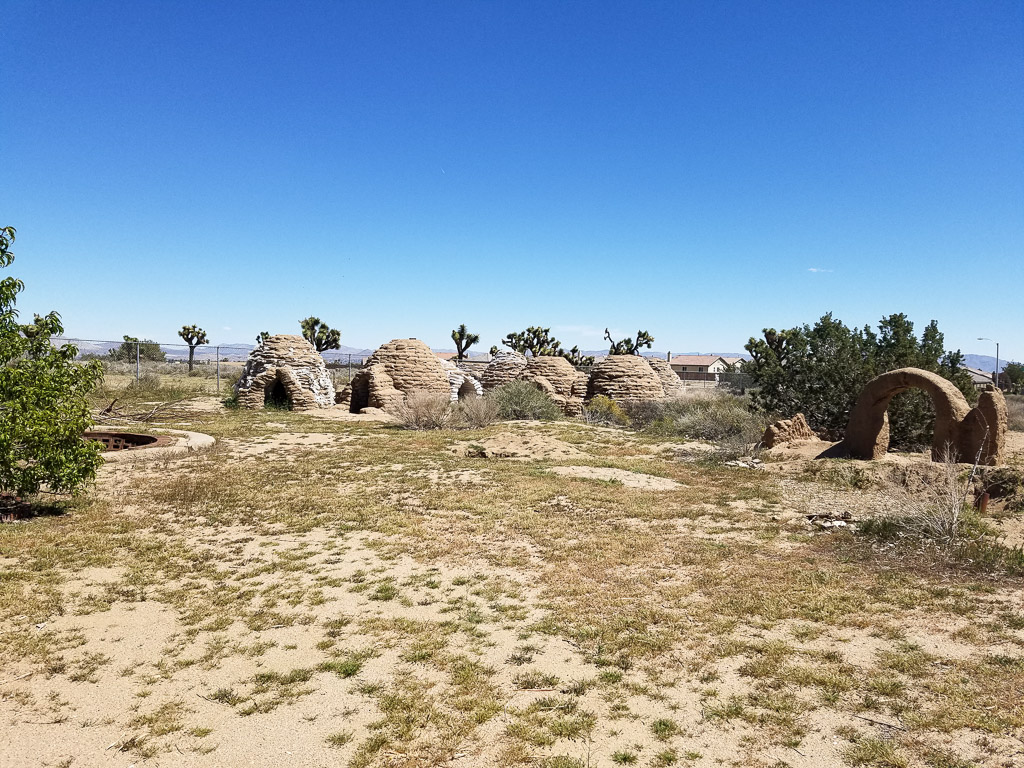 We step back out of the earth-home. My eyes readjust to the bright day. The sharp points of the Joshua trees’ fronds poke the cloudless sky. Its one of the few plants we see up here in the high desert. The sky in this desert is a brilliant blue that somehow looks like it has the clarity filter already on it. I feel so lucky to be here.

“We are all walking the walk here” 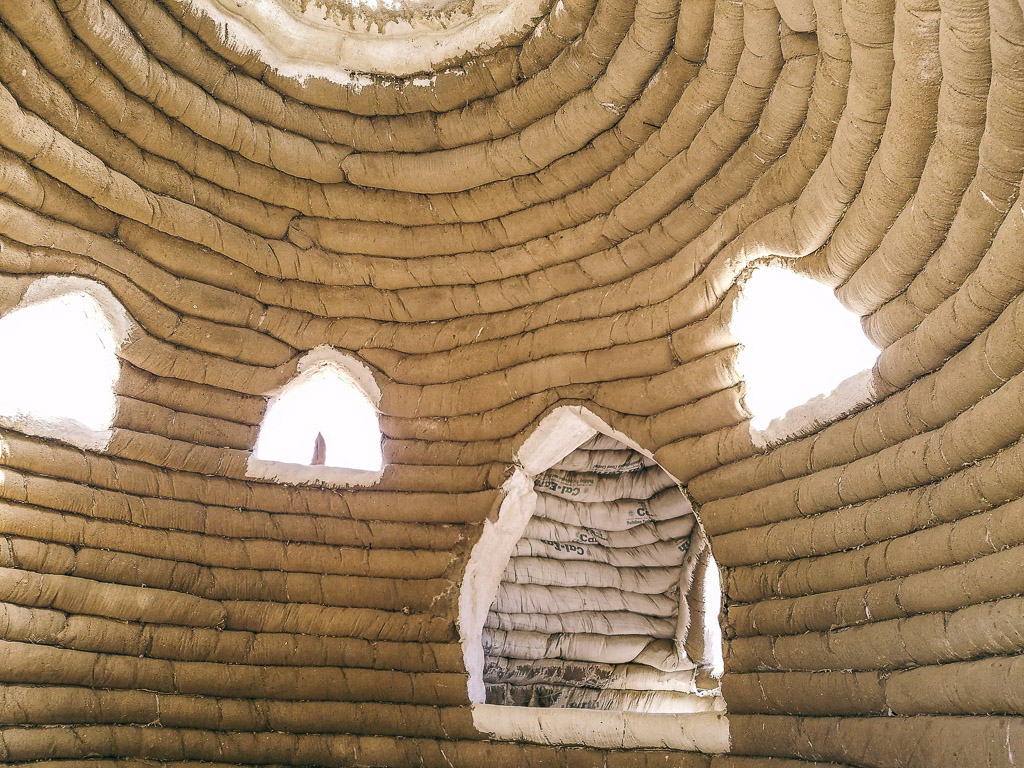 Made from the earth and polypropylene bags, the emphasis is on anyone being able to make their own home very simply from limited supplies.

“It’s just a polypropylene bag. It’s the same thing rice is shipped in, corn is shipped in, beans are shipped in. When it rains you can go down to your fire station and get some for free. This is one of the most common types of bags in the world and it’s biodegradable. And then we fill it with a mix of earth and water.”

“The idea behind it, what Nader Khalili used to always say is, ‘I want to be able to drop you anywhere on this planet with a shovel and roll of bag, and you can build. ‘” 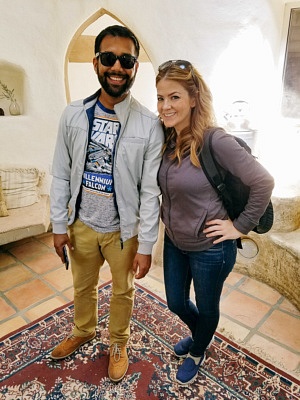 Our director makes a call for rehearsal and the crew closes in, making final adjustments to our set. It’s time to create our own world amongst these wistful homes. It’s time to make believe.

By now my cast mates (Ankit Vengurlekar of Gadgetwala fame and comic actress Rachel Leah Cohen) and I are ready to sign up for a weekend course at Cal-Earth. There’s something so gratifying about the idea of being able to build my own shelter should a disaster strike, or if I’m ever stranded on that proverbial island. Now I know I’m taking polypropylene bags as my luxury item.

Alice finishes the overview on how to build a home, stressing that anyone can learn this whether they are of slight build, young or old, or even an actor.

“You know, our site director who has built these homes all around the world is a classically trained pianist. His job before this was playing the piano on cruise ships. 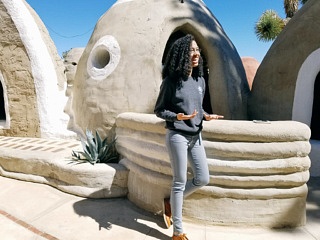 “I’m not telling you how incompetent our institute is, I’m telling you how incredibly just accessible – we are all walking the walk here. You really can be an expert at this and be crap at math.” I love how she laughs about this.

“I’m an English writing major. I want to write comic books. You know architecture, math, it’s not like my strong point. But I can build a house, and how empowering is that?

It’s all of the empowerment, Alice; it’s all of it.

I take my mark.  “Aaaaannnnnd ACTION!” 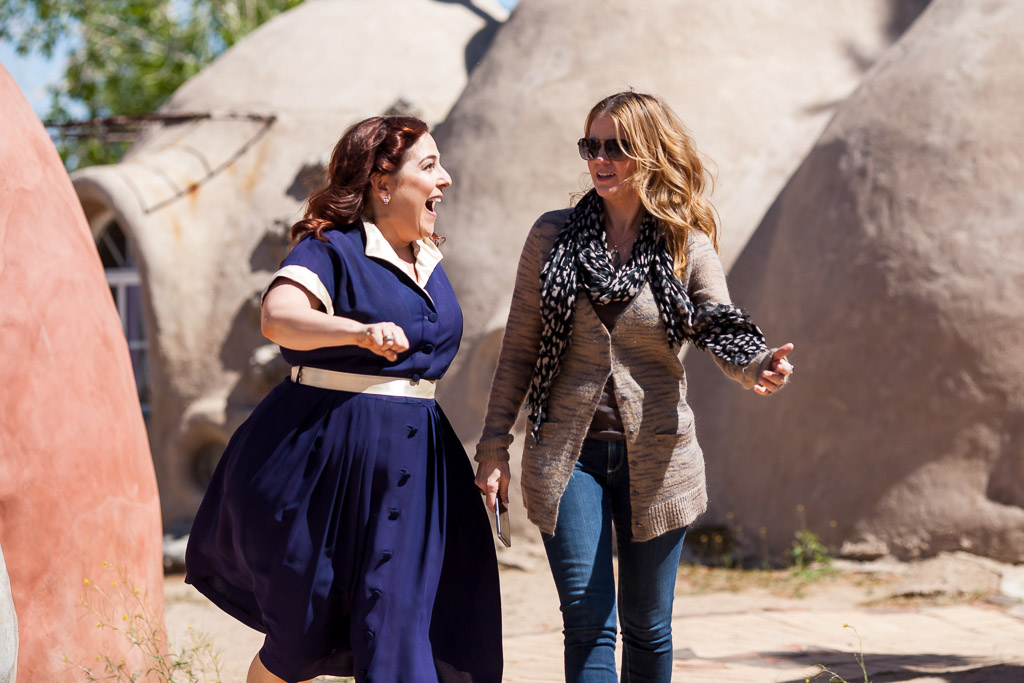 Do you want to learn how to build your own home? Help provide relief in disaster prone areas or simply learn more about this important Institute? Read more about the Cal-Earth classes and the philosophies here. 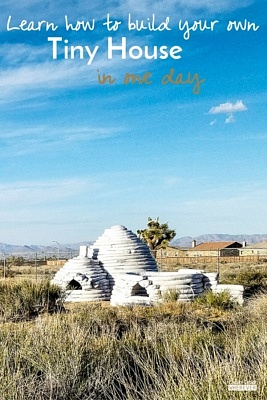 What do I pack when I go hiking or trekking? Whether it’s jeep riding through the sands of the Wadi Rum desert in Jordan, nomadically moving ger camps across Mongolia’s Eurasian Steppe or exploring the rocky geography of Northern Arizona, I’ve got several go-to items that make it into my bag. During my most...

Naked and Afraid: 11 Things I Thought About While Floating in a Sensory Deprivation Tank

It’s one thing to be naked around your best friend; it’s a whole other deal to accidentally touch each other’s bare skin, especially when you’re trying to achieve enlightenment. Perhaps Rachel and I should’ve sprung for individual time in the hotel spa’s only sensory deprivation tank, but what fun would...