Being A Cowboy: It’s More Than Just Snakes And Beans 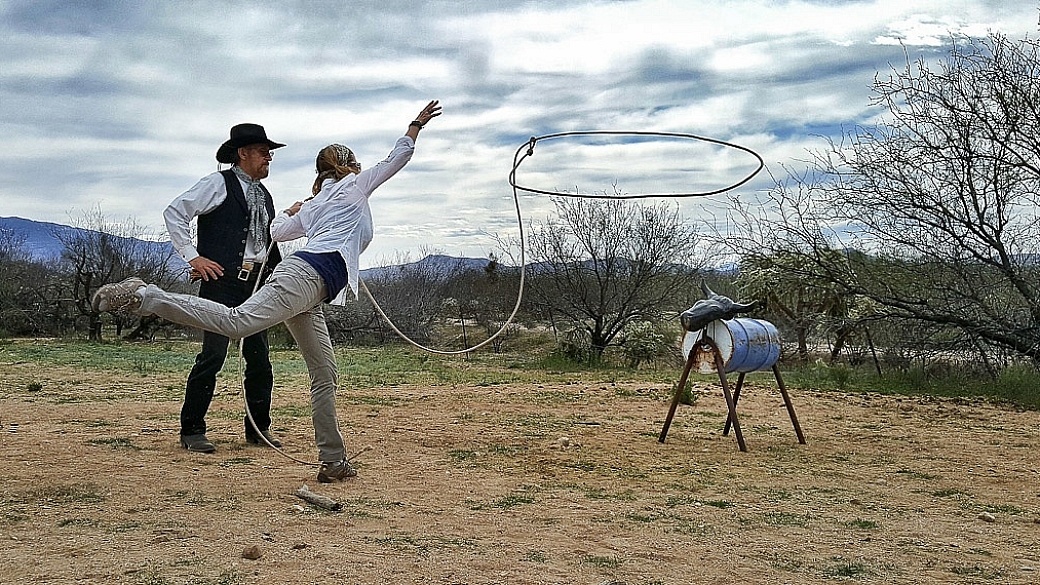 Being A Cowboy: It’s More Than Just Snakes And Beans

At some point I started thinking about cowboys as wild American explorers, but maybe I’m romantically forcing that idea a bit because that’s what I fancy myself to be on this weekend as I learn to be a cowboy.  Realistically, they tend cattle on horseback, have loads of ranch-ready skills and eat a lot of pork and beans. I’ve heard.

But this particular weekend, I am in Arizona’s Sonoran desert. I am a cowboy sans the horse, the beans and any discernable ranch skills, but I’m full of adventure and ready to challenge myself.

Once again, my friends at Corning® Gorilla® Glass have forced me out of my comfort zone. Last year, if you’ll recall, they flew me out to Northern Arizona’s Navajo Nation for some steep hiking into some of America’s oldest ruins and some tight squeezes through the breathtaking and highly photogenic Antelope Canyon. This time they rounded up an international group of bloggers and sent us jeep-first into miles of unending desert armed with nothing more than a Samsung Galaxy Note5 and a thumbs-up vote of confidence. 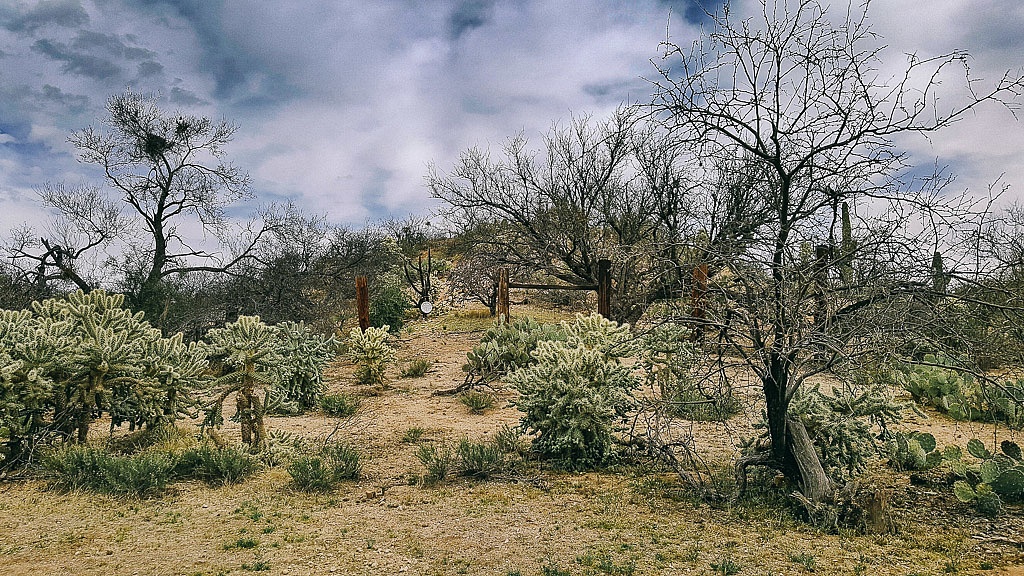 Beautiful and challenging, Arizona’s Sonoran Desert is a fun terrain to tackle if you have an experienced cowboy as a guide and the right gear with you. We brought our Samsung Galaxy Note5’s with us to capture the view, knowing that the screen is Corning® Gorilla® Glass 4 – which helps protect against drops and breaks.

Rumbling along in the back of the open vehicle, I really had no idea what I was in for, but I was dressed for it. I have some standard gear now that I’ve put together from multiple trips to various deserts around the world. Some might call it overkill; I like to think of it as wardrobe for the part you’d like to play, or at least being prepared for any possibility.

Of course we also had Walt, our guide, dressing the part in his ten-gallon hat, boots and holster; though I think he really WAS a cowboy… anyway, Walt was narrating our departure from paved roads and civilization, filling us in on all things Arizona. It was an excellent thing that I had no idea that the white metal box under our seat contained Jeannie, the KING SNAKE. All of the ignorance and bliss right there.

We bounced around on rain-carved gulleys, our tires kicking dust back at us. This prompted me to cover my nose and mouth with my neck scarf to avoid eating dust. I gripped the side of the jeep tightly as we flew up into the air, looking like a fashionable bandit, ready for a stagecoach takeover. Seriously, what were we out here to do?

Then, as Walt careened us into a sage bush, he informed our band of five to come up with a team name (we did, the “Glass Kickers”) and to keep our ears open for answers to a long list of tough questions as he handed back our worksheet. I don’t know how many surveys real cowboys fill out, but I promptly handed the paper to the most responsible cowgirl in our group, Leticia Barr of TechSavvyMama. 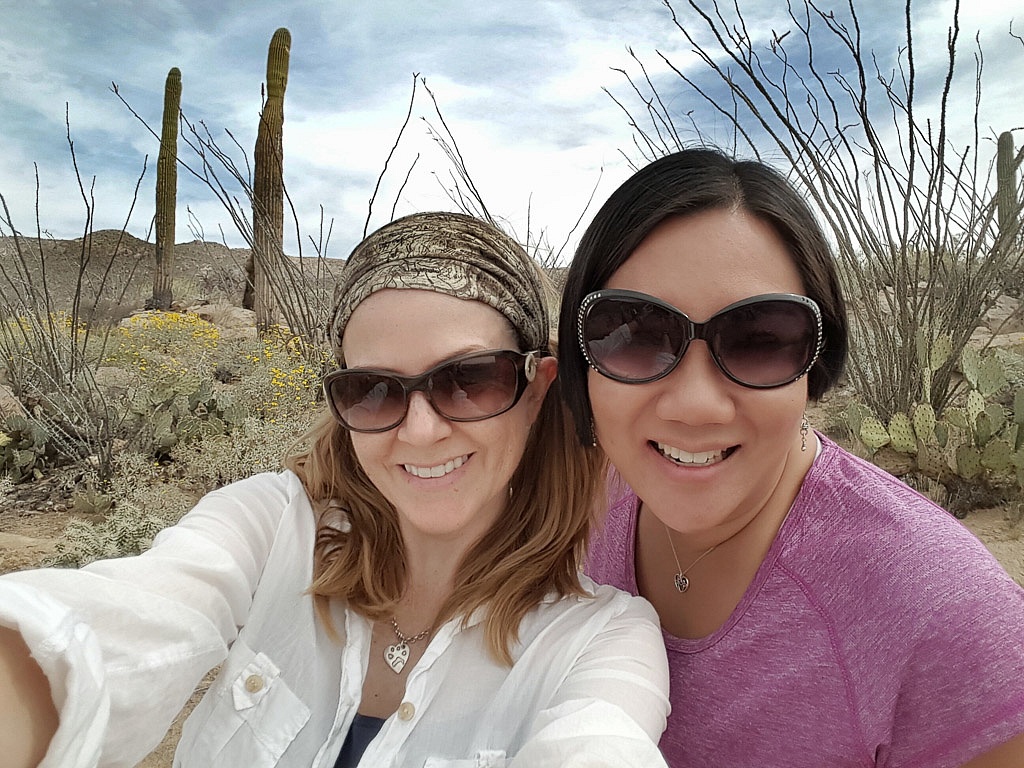 Leticia (one of my GorillaGlass 4 compatriots) makes everything fun – maybe it’s because she’s all about education and how to use tech to make life simpler, especially for moms! Follow her @techsavvymama. Taken with the Samsung Galaxy Note5.

Cowboy Walt finally pulled over in an open area set up with a target cube to the left and a sideways barrel wearing a long-horn head to the right.

“Have you ever roped a steer before?” He asked in a non-condescending tone, no steers in sight. Walt picked up a rope with a stiff hoop in it, spinning it up into the air. So easy, I mean, this is set up to make us city slickers feel pretty rugged, right? I am a self-professed fraidy-cat, but as long as it doesn’t involve me jumping off cliffs, walking on glass-floored sky bridges or eating snakes, I love trying new things and testing my abilities. 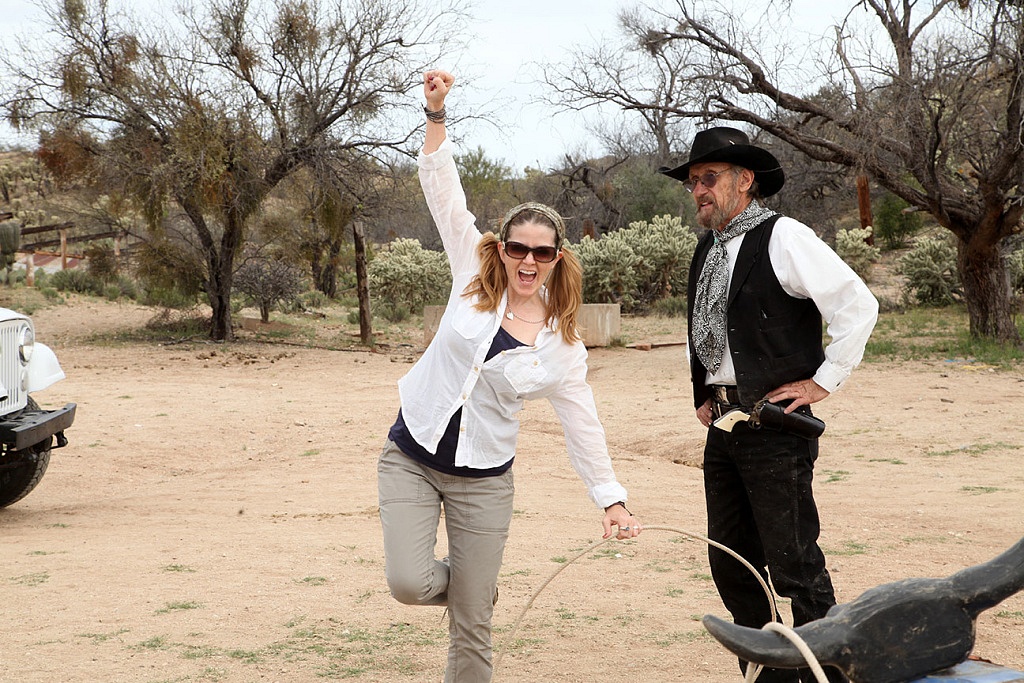 Awesome shot! That moment when you believe you are good at something and then find out you actually ARE! Taken with the Samsung Galaxy Note5.

Swinging that rope high into the air I stared that long-horned barrel DOWN. “You don’t leave this herd today, barrel. Not on my watch.” I squinted at it as I launched my lasso. Nope. I toughened my glare, trying hard not to get caught up in the rope and threw…still nope. On my third try I roped the sucker, no doubt giving my team members a false sense of how easy it was, me clearly looking like a roping expert. 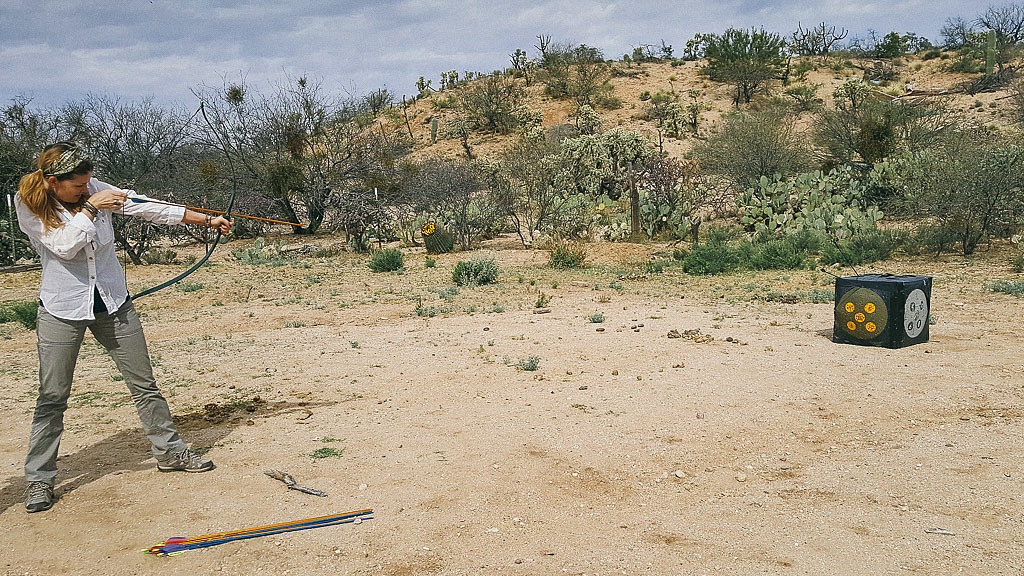 But my form is pretty good, right? I tried to play it cool about not hitting that target. Taken with the Samsung Galaxy Note5, which is a great companion out in the rough terrain of the desert since it’s covered with Corning® Gorilla® Glass 4, the toughest cover glass yet from Corning.

Our next task was shooting bows and arrows, which I quickly failed at; dashing all visions of Katniss and I taking over the Capitol together. Luckily for us we had “20 Point Jim” of JimsReviewRoom to nail the bullseye for our team.

I totally redeemed myself at the target practice when I hit the little pie pan at 50 paces. In my head I’m amazing at everything, but it’s another thing entirely to be validated by the “TING” of the BB hitting tin.

You’re Tougher Than You Think You Are

After some (not so great) horseshoe throwing and some random cactus fruit eating we came to the slightly terrifying desert inhabitant portion of the morning.  Walt lifts the white box out from under the seat that we all had been nonchalantly sitting next to for the last two hours.

And then there’s a SNAKE: writhing and twisting again and again, slithering and tightening itself around Walt’s arm. It’s not that I’m afraid of snakes per se, but like most of us, I’m unnerved by their bendy-ness, their slithering unpredictability and the fact that I have no knowledge whatsoever of which ones will launch at me and sink their fangs into my appendages. But since this one was pleasantly named “Jeannie” and Walt, our grizzled, tough old cowboy seemed to act like they were friends, I decided to put on my cowgirl pants and give her some love. 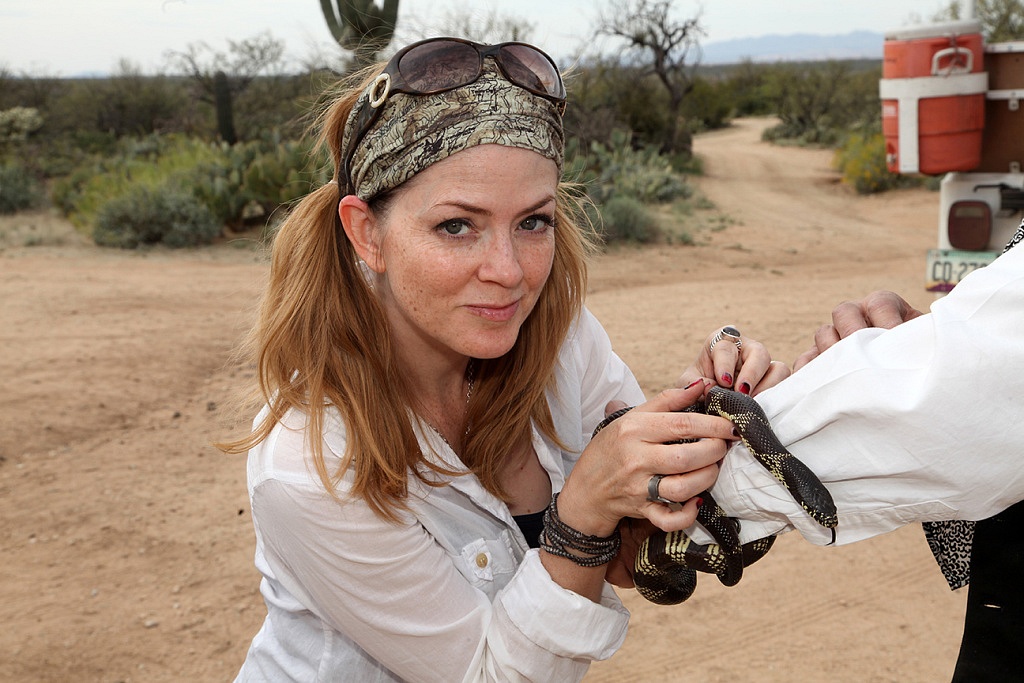 This is totally close enough. I didn’t want to stress HER out, you know? Taken with the Samsung Galaxy Note5 with Corning® Gorilla® Glass 4, which is perfect for capturing me getting all Cool Hand Luke in the desert.

I was pretty proud of myself. I had some fears mixed in with the challenges that day in the desert. Fear of not knowing what we were in for, or if jeep-ing down steep hillsides would be safe, fear of not being good at a new activity in front of my team, fear of Jeannie the King Snake constricting my face…but I often find that I’m tougher than I think I am. I love proving that to myself again and again. Most often I do it through travel, and the rewards are really confidence building.

Overall, how did our team do? Hey we came in second! I’m hoping part of it was the limerick I wrote as a creative answer to “Why is this road called the Spanish Road?” But it was all of us, Leticia, Jim, Meridith and Kim from Project Eve and myself – the “Glass Kickers,” working as a team, trying new things, and testing our toughness in an unknown environment that made the difference. I love how adventure can bring people together. 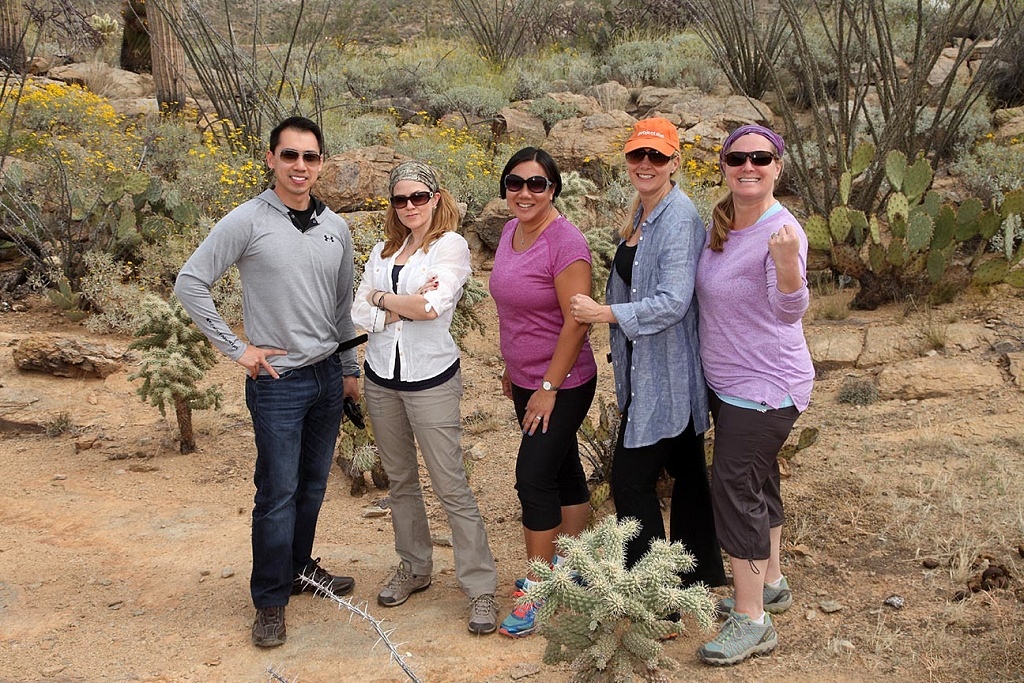 When was the last time you tested yourself? How tough was it?

Corning Gorilla Glass – who grouped together an interesting posse of writers, photographers, bloggers, and travelers and challenged us to a weekend boot camp in Tucson, Arizona – sponsored this post. Everything written is my own opinion, though, since this is my blog. 🙂

Sidebar: You can book your own desert tour with Trail Dust Tours. 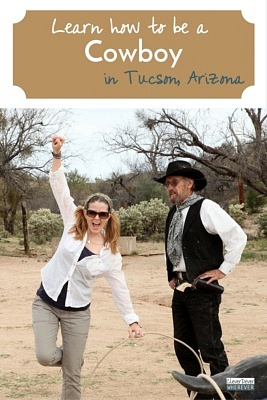 9 Photos That Will Make You Want to Visit Arizona Now

Here are some of my favorite photos from my recent trip with Corning Incorporated and the “Gorilla Glass 4:” Leticia Barr, Kelly Olexa, (me) and Beth Santos. We pushed ourselves through some rough terrain, and captured as much of it as...

“I Took Where I Grew Up All For Granted”

Looking out over the vastness and geologic spectacle that is Northern Arizona, it’s easy to get lost. Lost in the wonder. Lost in the landscape that rises up in surprising shapes and plunges down below, carving out the earth. Lost in the expanse of space that you sometimes forget exists when you live in a city next...

Naked and Afraid: 11 Things I Thought About While Floating in a Sensory Deprivation Tank

It’s one thing to be naked around your best friend; it’s a whole other deal to accidentally touch each other’s bare skin, especially when you’re trying to achieve enlightenment. Perhaps Rachel and I should’ve sprung for individual time in the hotel spa’s only sensory deprivation tank, but what fun would...

What do I pack when I go hiking or trekking? Whether it’s jeep riding through the sands of the Wadi Rum desert in Jordan, nomadically moving ger camps across Mongolia’s Eurasian Steppe or exploring the rocky geography of Northern Arizona, I’ve got several go-to items that make it into my bag. During my most...